Despite still being a Junior powerlifter, Asein Enahoro proved that he is able to rival anyone. 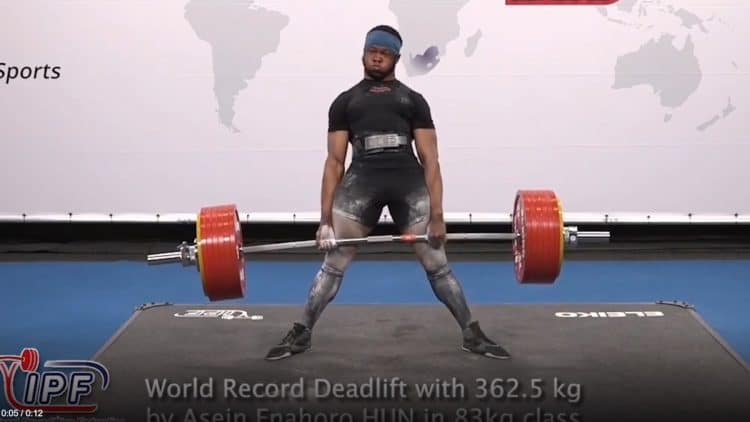 In the powerlifting world, Asein Enahoro is undoubtedly one of the best emerging athletes, which he proved at the 2022 IPF World Classic Powerlifting Championships. The prestigious competition is taking place from June 6-12, 2022, in Sun City, South Africa. There have already been numerous incredible performances and world records, but Asein Enahoro’s 362.5-kilogram (799.2-pound) deadlift is one of the most impressive feats of strength.

Asein Enahoro, born in 1999, is still eligible to compete exclusively in the Juniors age group. However, Asein is on another level compared to anyone his age, so he decided to represent Hungary at the highest level, which is the Open age division. He competed in the raw 83-kilogram (183-pound) weight class, and rivaled the greatest athletes. In addition, Asein Enahoro also broke the U83KG IPF Deadlift World Record by 22.5 kilograms.

Asein Enahoro also held the previous World Record, having deadlifted 336 kilograms (740.8 pounds) at the 2021 IPF World Classic Championships. No one was able to beat him before, but now they can’t even come close to him.

Asein Enahoro weighed in at 82.25 kilograms (181.3 pounds) for this competition. So his 362.5-kilogram (799.2-pound) deadlift is 4.4x his bodyweight. Following his brilliant performance overall, Asein finished in third place of the 83-kilogram weight class. Only Wallace Delaney and Kengamu Jurins managed to beat him.

Asein Enahoro’s third deadlift attempt of 385 kilograms (848.8 pounds) was very close. He managed to lift it up over his knees and lockout the left leg, but his grip failed on him in the final seconds. If Asein was successful in lifting this, he would further improve the deadlift record, and tie for first-place with Delaney Wallace. So the win in the 2022 IPF World Classic Powerlifting Championships was just seconds away. However, Asein will come back even better next year.

The 2022 IPF World Classic Powerlifting Championships was Asein Enahoro’s fourth sanctioned meet. So it makes it even crazier that he managed to claim a bronze medal and a World Record. The future looks bright for him and he will achieve many more amazing feats.