Ashley Contorno has scored a new squat PR with six weeks left until her next competition. 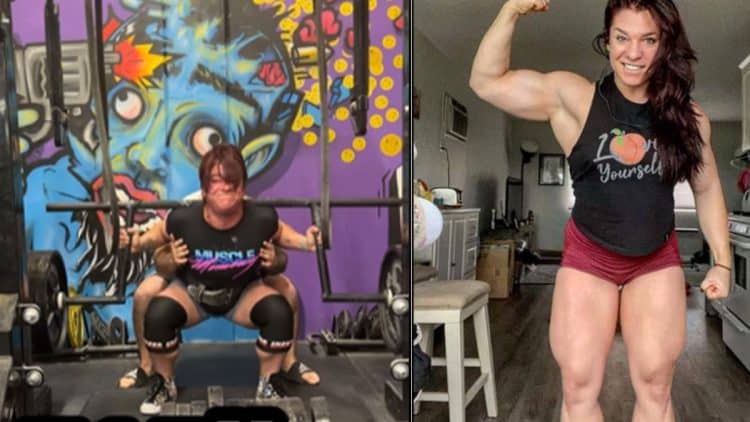 Ashley Contorno is a product of hard work, talent, and, most importantly, knowledge. As a doctor of physical therapy, Contorno has a deep understanding of how the human body works, so she can give better advice than most people. Moreover, she is a brilliant powerlifter, which goes hand-in-hand with her career. Because of this, Ashley is consistently making progress, while also avoiding injuries. So, Ashley recently shared a new 515-pound (233.6-kilogram) squat PR from training.

Ashley Contorno used a lifting belt, knee sleeves, and smelling salts to complete the squat, making it raw by powerlifting standards. However, she also used a cambered bar instead of a standard bar, which did make a difference.

The cambered bar most notably eases the pressure on the shoulders for those who have mobility problems or any upper body injuries. However, as the plates hang significantly lower than usual, the cambered bar makes the squat much harder to stabilize. So, Ashley Contorno’s new PR might be even more impressive than it seems.

Ashley Contorno is currently preparing for the 2022 USPA Pro, which will take place on September 24-25, in Kansas City, MO. Prize money of $50,000 has attracted many of the biggest names in sports. Ashley will, however, try to take home at least some of the prize money.

Ashley Contorno has taken part in 17 sanctioned powerlifting competitions so far and won nine of them. She mostly competes in the 75-kilogram weight class and even came close to setting an All-Time Bench Press World Record in this division. However, she was not successful and is currently in possession of the U75KG Third-Heaviest Bench Press. Regarding her victories, Ashley Contorno’s most notable win came at the start of this year, as she won the 2022 WRPF Ghost Clash.

Ashley Contorno is 33 years old and is just entering her prime. This isn’t uncommon in powerlifters, since most of them hit their peak strength in their 30s. In addition, Ashley managed to do so on a vegetarian diet for the past 10 years. It obviously works for her, and we will hopefully see her in her best shape yet at the 2022 USPA Pro.