The former two-time Classic Physique Olympia champion is weighing his options and might compete before attempting to win back his crown at 2022 Mr. Olympia. 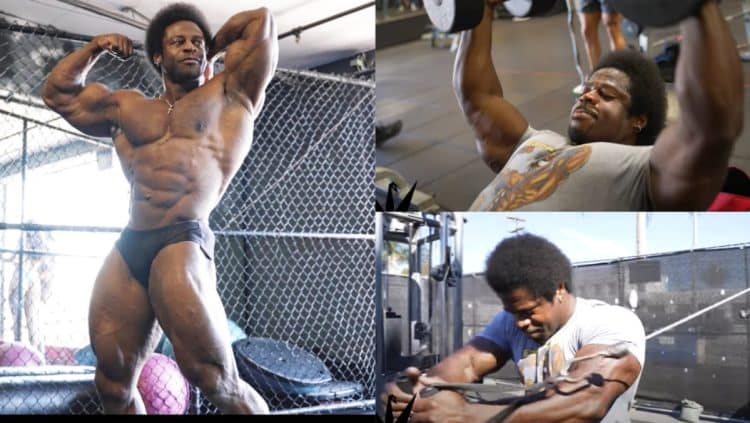 Bodybuilder Breon Ansley had planned to compete at the Tampa Pro before an illness hampered his plans. In a recent video on YouTube, Ansley shared that he may compete at the upcoming 2022 Dubai Bodybuilding contest before taking his talents to Mr. Olympia months later.

In 2017, Breon Ansley reached the top of bodybuilding in the Classic Physique division after winning his first Olympia title. Ansley laid waste to his competition on stage with detailed muscle separation, conditioning, and one of the most shredded backs among Classic Physique competitors.

The following year, Ansley retained his title when he won at the prestigious 2018 Olympia contest. En route to the monumental victory, he defeated the likes of the now three-time Classic Physique Olympia winner Chris Bumstead.

In 2019, Ansley failed to fend off C-Bum, who won the Olympia title, and has held it firmly in his grasp ever since. While the two are no doubt destined to collide again, Ansley is considering doing a show before he tests the waters at 2022 Olympia in roughly 18 weeks.

This year, Ansley brought an impressive package to the 2022 Arnold Classic but found himself in fourth place behind third-place finisher Urs Kalecinski, runner-up Ramon Rocha Queiro, and the two-time Arnold Classic champion Terrence Ruffin. After missing the Tampa Pro as a result of an illness, Breon began discussing his next move in the sport while hitting a brutal chest workout.

In a recent YouTube video, Ansley explained that Traveler’s Diarrhea prevented him from showing up to perform at the 2022 Tampa Pro.

“A lot has transpired and a lot of changes guys. I know I had talked to you about doing the Tampa Pro and then doing Texas and then maybe doing the Arnold UK after that but I had maybe a tapeworm. The doctor actually named it ‘Traveler’s Diarrhea’ is what I had, and it lasted for a about a good three weeks.” Breon Ansley shared via YouTube.

When discussing his current bodybuilding season, Breon mentioned he might be taking his services to the 2022 Dubai Bodybuilding show scheduled for October 22. Even if he doesn’t attempt a show before Olympia, he said it’s important to start prep now, considering the marquee event is approximately 18 weeks away.

“As far as the decision-making process is concerned, if we’re going to do Dubai, October 22, if not that one, then you already know. The big granddaddy, the O in December.” Ansley continued. “We still got to stay in good shape even if we’re going to do Olympia, prep starts now. We’re like 18 weeks out.”

After providing details about his current plans for this year, Ansley switched gears with a chest-building workout.

Note: Sets and reps were unclear based on the footage provided

Ansley kicks off the workout with cable chest flyes. After performing one set, he takes a moment to reflect on his prep and how to bring an even better version of himself to his next show.

Ansley performed dumbbell flyes with his chest in a stretched position for his second exercise.

Further adding to his chest pump, the Classic Physique Olympia champion proceeded with the decline chest press and gradually increased the overall load.

“I’ve been really enjoying dips lately guys, for your upper plate here, your upper chest. Where I feel dips at is all throughout here, upper chest, have it bounce off that clavicle. Then, coming out to the side here [points to pec], a little bit, not all the way in the bottom but coming all the way out to the side, maybe right here under the armpit.”

Before finishing the training session, Ansley reflected on his progress once again.

“Chest. It was a big chest day. That’s the thing guys. You always want to be proud of your day at the end. Understand that everything doesn’t always have to be perfect. As long as you look at it objectively, and you pushed, and you made yourself uncomfortable, and you didn’t settle, celebrate that small win because it most definitely adds up to the big wins.”

In preparation for this year’s season, Ansley has continued bulking up. He shared a high-volume back workout recently, which showcased his strength but especially his endurance. In addition, the bodybuilder never goes light on leg day. Back in April, he turned heads with a leg-pumping workout, which consisted of nine different exercises.

Ansley has said a change in strategy will be required if he plans to contend with the very best later this year. Should he make the requisite adjustments to his physique, Ansley plans to win his third Olympia title by defeating Bumstead, who took the title from him back in 2019.