The seven-time Mr. Olympia is looking swole even though his plan is to commentate at 2022 Olympia, not compete. 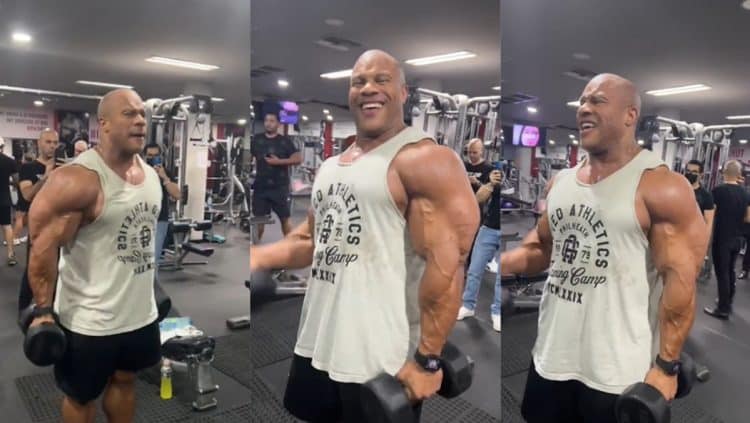 Despite having no plans to compete any time soon, bodybuilding legend Phil Heath is looking massive. In a recent post made to Instagram, Heath showed off his huge biceps while hitting some dumbbell curls.

Phil Heath etched his name in the history books with a successful bodybuilding career. He earned the Mr. Olympia title seven times consecutively (2011-2017), matching the number of Sandow trophies held by bodybuilding icon Arnold Schwarzenegger. As a Men’s Open competitor, “The Gift” was celebrated for his 3D appearance, freaky muscle mass, and grainy conditioning.

In 2018, Heath was dethroned by the late Shawn Rhoden after an epic battle on stage. Despite being unable to tie Ronnie Coleman’s record of eight Olympia titles against Rhoden, Phil tried again the following year. He returned to the Mr. Olympia stage in 2020, however, he finished the show in third place, behind runner-up Brandon Curry, and champion, Big Ramy.

Despite suspicions, Phil Heath has never officially announced his retirement. Last year, the bodybuilding legend struggled to get his health in good standing after grappling with a severe case of Covid-19. He lost a considerable amount of weight as a result of the illness but hasn’t let up in the gym.

Earlier this year, Phil clarified that there was only a 5% chance that he would actually return to a contest. Meanwhile, his predecessor and friend, Jay Cutler, said Phil is done with competing altogether. Phil met with Olympia President Dan Solomon earlier this year, which many interpreted as a hint that he would soon be returning to a competition.

With preparations heating up for all athletes this year, Heath broke some major news a few weeks ago that he would serve as a commentator for the upcoming 2022 Mr. Olympia contest instead of competing. Despite his commitment to the broadcast team, the Open class bodybuilder isn’t done in the gym and says he’s just getting started.

In a post made to Instagram on Monday, Heath looks to have added muscle mass by the looks of his huge biceps and full chest.

“Just a Man who believed in his dreams and took himself through hell to get to his promise land and still wants more out of this life.

When you want success more than anyone you will go through absolute madness to get it. Most common folks have limiting belief systems and it keeps them from making their dreams a reality. You must TRUST in yourself and put your faith first. God gave you a gift unlike any other person! You are One of One! When you face your fears daily and do it with a strong and rooted spirit- You will accomplish your goals and dreams!

Last workout here in Mexico and I loved every second. The sweat I poured into each rep, each set was fueled by the energy from above along with my amazing fans.

I ain’t done yet. I’m only getting started.

Before this post, Heath appeared downsized, according to some of his physique updates throughout the year. Back in May, he attracted a lot of attention with a slim waist and defined six-pack, an area which Heath has struggled with at shows in the past.

Given the shocking number of athletes dying lately, perhaps Phil’s exit from competitive bodybuilding came at an opportune time. Last year, Rhoden died of a suspected heart attack and George Peterson also met his fate before getting the chance to compete at 2021 Olympia.

The concerning trend continued this year as the late Cedric McMillan died at 44. Last month, popular IFBB/NPC judge and bodybuilder Jerry Ward passed away at 46, though details about his death have yet to be made official.

Phil Heath’s impact will still be felt at 2022 Olympia even though he’s not bringing his posing trunks. Given the promising update, Heath plans to look his best in the broadcast booth for the biggest bodybuilding show of the year.