The Estonian powerlifter is close to being the best in the world with this performance, and crushed his latest PR without a lifting suit. 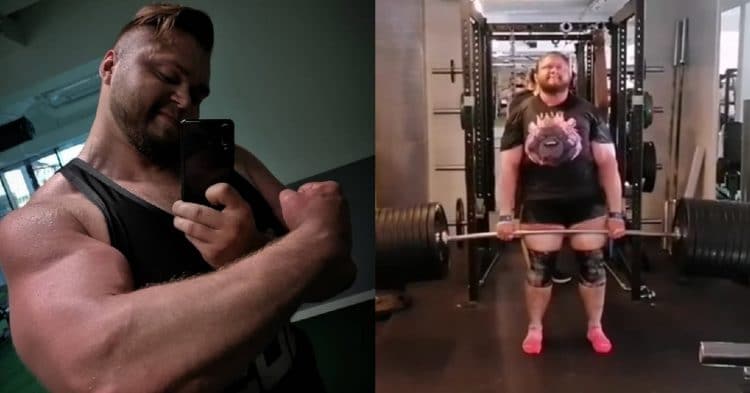 It was just a week ago when Estonian powerlifter Asko Karu hit a new PR with a 472kg/1104 lb deadlift. This week he took that 10 kilograms higher with a 482kg/1,062lb deadlift, and he did it without wearing a lifting suit.

He posted the lift on Instagram, and almost seemed disappointed in himself. He said he wasn’t feeling it, he didn’t get the right sleep, he hadn’t eaten enough, and even the lightweights felt heavy. He also said that the suit he wanted to wear for it wasn’t ready yet. Until then though, he’s training for bigger numbers, he says. Check it out.

“LIFETIME PR!
.
Didn’t feel it today at all, didn’t get a proper sleep, haven’t eaten enough and the lighter weights felt like heavy ballers today. Got my suit done and plan was to try to hit it with single-ply suit today but apparently, the deadlift suit is too small (that’s what she said) from the thighs. But no bitching, plan was to aim 480kg+ today and got the work done with a proper grind and no suit.

Can’t wait to get my hands on properly calibrated plates, deadlift bar now and go for 490kg+.
I’m feeling hungrier than ever and want to push my maximum potential to the limits!
.
Take care y’all & be safe,
Karu’s out.
Peace”

The lift would be difficult for anybody on a good day, but you can see the stress in the lift for Karu. It is also a lift that is only 19kg/42lbs from tying with Hafthor Bjornsson’s all-time heaviest lift of 501kg/1,104lb pull. Asko Karu also did this without the assistance of a lifting suit, which is an impressive feat for powerlifting.

Instead, he wore knee sleeves, lifting straps, and bright socks. It is not a perfect lift, with the slightest hiccup when he brings it above the knees. Even so, his form stays true to finish the deadlift.

Asko Karu’s ambition is obvious not just in the lift, but it’s what drives him. His Instagram bio states that his next goal is to reach 501kg/1,104lbs. He’s just added 10kg to his last PR in a week’s time, and so he’s on track for perfecting the 501kg/1,014lbs.

Deadlifting is Asko Karu’s thing. He has won 7 out of 8 deadlift-only meets since 2017. In 2019 he won the World Powerlifting Coalition World Championship with 390kg/859.8lb deadlift and only made 1 out of 3 attempts.

Asko Karu is definitely showing he’s got only one thing on his mind right now, being the best in the world. He needs to beat Peiman Maheripourehir of Iran who recently made a 492kg/1,084.7lb deadlift. He also needs to best Ivan Makarov of Russia who lifted 490kg/1,080.2lb.

Both of those contenders have the same goal in mind that Asko Karu has. We will see what happens this year.

The 12 Best Kettlebell Back Exercises