The barbell rollout has big advantages when it comes to core development. Here's a guide to help you execute this movement perfectly! 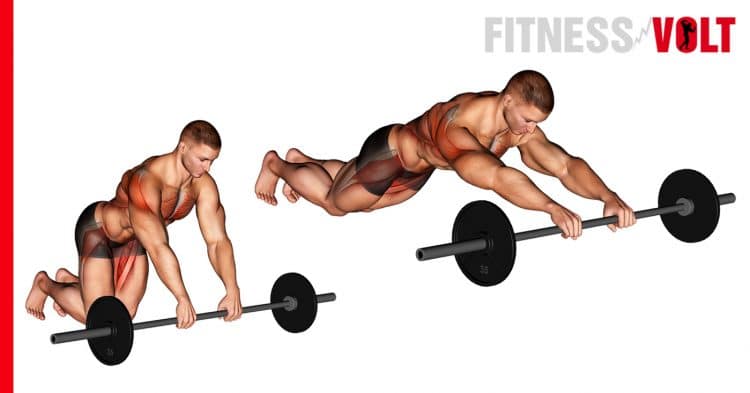 The barbell rollout is undoubtedly one of the most underrated exercises. However, we can tell you from experience that it’s also one of the most effective for building the core and other muscles as well. It’s a great strengthening exercise that definitely deserves a role in your workouts and we’re going to cover this movement so that you can effectively incorporate it into your training regime.

Here’s a guide to the barbell rollout…

The barbell rollout is typically utilized to build the muscles of the core or midsection. However, it works several muscles of which we’ve detailed below.

The iliopsoas musculotendinous unit (IPMU) or iliopsoas is a collection of muscles that include major and minor psoas and the iliacus. Asserting its superior role in movement of the thigh, iliopsoas is the strongest hip flexor muscle.

The iliopsoas is essential for standing, walking, and running while the iliacus and major psoas function according to different postural changes.

A total core activator, barbell rollouts engage the external abdominals and obliques as well as the deeper stabilizer muscles. Done right, this movement should build core strength and improve ab and oblique development.

All three heads of the deltoids take on a strong role in stabilizing the arms to perform the rollout. The front delts lift the arms forward while the rear delts help to stabilize the upper body.

Because of the nature of barbell rollouts you could consider it a hybrid ab and chest workout. That’s because the pectoralis muscles help to move the arm up and down as well.

Also read: 10 Barbell Exercises For Abs That Will Take Your Gains To The Next Level

How To Do The Barbell Rollout

The barbell rollout is not typically a beginner exercise

There are a few variations of this movement that you can do without having to use a barbell, which makes it a pretty versatile exercise.

The ab wheel device is no doubt the most popular variation. It does much of the same thing but it takes up a lot less space. Although, it may require a little more balance and stability which is definitely a good thing especially if you’re trying to train your core muscles.

You can replicate the barbell rollout by placing something that’ll slide across the floor under your hands. Dryer sheets, paper towels, tupperware caps, moving sliders are all great options.

Some people will also walk their hands forward and walk them back as an alternative but the sliding variation is excellent, and this is a very effective method also used for other exercises as well.

A stability or exercise ball is a very useful tool that is also recommend for beginners because it’s easier. However, that doesn’t mean it’s easy though because it does require additional stabilization and balance to do it effectively.

How To Incorporate The Barbell Rollout Into Your Training Routine

The barbell rollout is a pretty intense exercise when done right. That’s why we recommend either doing it after your primary lifts in a workout session or as part of your core training routine. Just make sure that you are adequately warmed up before performing this exercise since it does involve stretching of the core muscles.

One great way to include the barbell rollout in your training is to do supersets which involves doing two exercises back to back. So, for example, you’d do hanging leg raises and then jump right into the barbell rollout. You could take a short rest break and then repeat this for 3 total sets.

The rollout also makes for a great circuit training exercise which involves doing a series of exercises for rounds.

The barbell rollout has earned its place in any core training routine. It takes a little practice but once you become proficient at it, get ready because the gains are coming. We hope that you found this guide helpful and now it’s time to get to training!