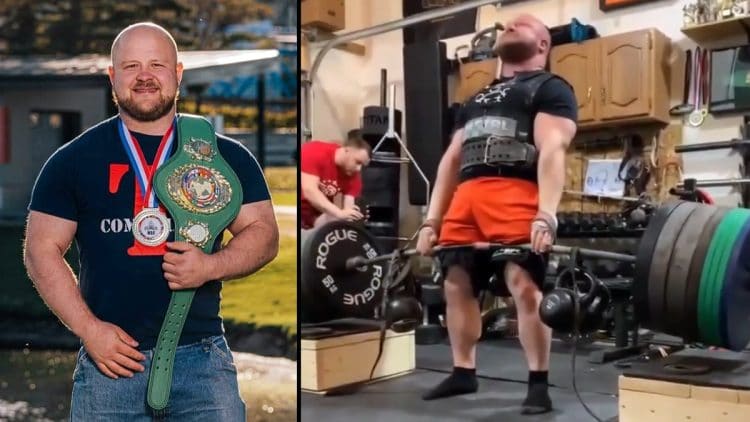 Ben Thompson broke the record of Sean Hayes by 17.2 kilograms (37.9 pounds). Sean pulled 560.1 kilograms (1,235 pounds) at the 2022 King & Queen Of The Throne just over a month ago. Ben used a deadlift suit, lifting belt, and straps to aid him in the record-breaking performance. All the equipment he used is allowed by Strongman standards.

You can watch his lift here:

Although Ben states that he lifted 1,270 pounds in his video, the official results show that he lifted 577.2 kilograms, which correlates to 1,272.5 pounds. In his video, Ben also claims that it was an 18-inch deadlift. This is because the silver dollar deadlift is also known as the 18-inch deadlift. Historically, the barbell was loaded with two boxes filled with actual silver dollars on each side.

Coming from Canada, Ben Thompson’s Strongman career can be traced back to 2007, so it is clear how much dedication and hard work he put up to get to this point. Ben’s greatest performances came in the past two years, which means that he is just now hitting his prime years. Alongside that, Ben now holds the All-Time Silver Dollar Deadlift World record, and this is arguably his greatest achievement.

Ben Thompson took part in one top-tier full Strongman competition, which was the 2016 Giants Live North American Open. He only managed to finish in ninth place, but got the honors of representing his country at the highest stage.

Ben had one more notable performance last year, having competed at the 2021 Static Monsters Worldwide. He finished in 11th place out of 1200+ competitors. Ben was also the second-highest-ranked Canadian in this competition.

Ben Thompson has very clearly found out in what event he is the greatest, but it took a lot of hard work for him to become the greatest in the world. Despite the impressiveness of his recent Silver Dollar Deadlift World Record, it makes everyone wonder how much further he can lift.

9 Ways to Boost Your Overhead Press