Sean Hayes' 1235 lbs Silver Dollar deadlift is also the heaviest deadlift of any variation done in a competition. 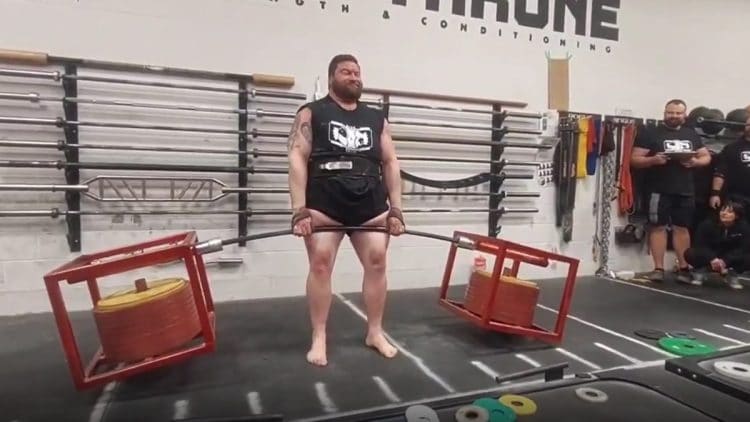 Sean Hayes has set an extremely impressive World Record while competing at the 2022 King & Queen Of The Throne. The competition took place on April 2nd, 2022, in Surrey, Canada. Sean only competed in the Silver Dollar Deadlift event, and set the new All-Time World Record by pulling a massive 1235 lbs (560.1 kg). This also represents the heaviest deadlift ever done in any competition.

The Silver Dollar Deadlift, also known as the 18-inch deadlift, is an old-school, legendary Strongman event. It is an elevated variation of the normal deadlift, with weighted boxes on each side instead of the normal plates. Historically, the boxes were filled with actual silver dollars, but now we have special attachments for weights.

After acknowledging Sean Hayes’ recent silver dollar deadlift record, one of the greatest Strongman athletes of all time, Zydrunas “Big Z” Savickas, sent a congratulatory note to the young star.

“I want to congratulate you on your World Record in the Silver Dollar Deadlift. 560 kg. Amazing weight… For future, I want to wish you more World Records,” said Savickas.

Sean Hayes is in his early thirties, and he is relatively new to the sport of professional Strongman. Although he has probably been training for a long time, Sean’s debut competition came in August of last year. He took part in just one other Strongman competition, which was in November of 2021.

In his first-ever competition, Sean Hayes stood on the podium and was proclaimed as Canada’s Third-Strongest Man. His greatest moment in that competition was winning the Car Deadlift event, where he pulled ten reps of a car, which weighed 800 lbs (363 kg). This is just proof of how much Sean excels in these types of events.

You can watch his Car Deadlift performance here:

Sean Hayes definitely has an extremely bright career ahead of him, and his Silver Dollar Deadlift World Record is the clearest proof of that. It is just a matter of time before Hayes will get the chance to have his breakout meet, but when he does, we will see some amazing feats of strength.