As a result of his weight loss program, Big Loz has developed a visible six-pack, as well as a shredded physique in general. 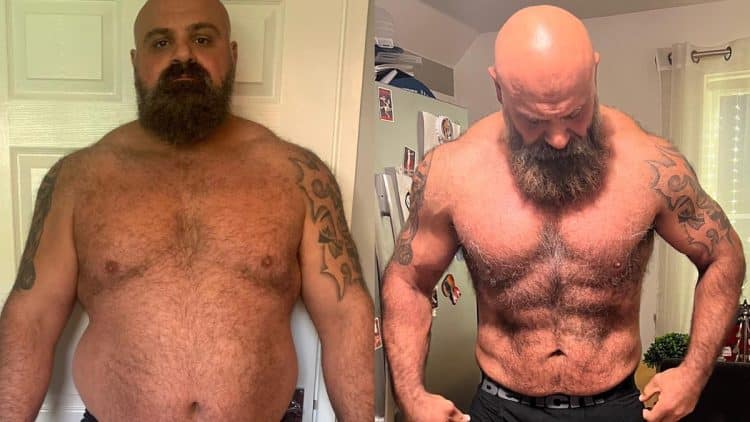 Laurence Shahlaei, better recognized as Big Loz, is one of the greatest Strongman athletes in the past decade, competing in events such as the World’s Strongest Man competition. Known for his massive size and strength, he was a formidable competitor on the Strongman circuit. However, despite his impressive strength, his weight and diet were always an issue for him, often weighing in at over 350 pounds. Luckily, after retiring from Strongman, Big Loz embarked on a weight loss journey and has now shed 102 pounds.

Laurence Shahlaei revealed a side by side picture on his Instagram, but addressed the journey in detail on his YouTube channel. He picked out the most frequent questions from his fans and answered them in the hopes of inspiring others to follow his path.

Big Loz explained that whenever something went wrong in his life, he always found comfort in food. The process began while he was in his teenage years and culminated after he retired. In Strongman, being bigger can be a benefit, however, once he stopped training rigorously, the bodyweight became a problem. In addition, Laurence revealed how long it took him to lose 102 pounds.

“Portion sizes go through the window, I could just eat through boredom, I hated myself at the same time, but that mental side can be very very difficult… It’s not been a quick fix at all. Start to finish, about two years.”

Laurence Shahlaei has been taking it slow, since his priorities were health, fitness, and a better relationship with food. So, Big Loz wanted to make the changes enjoyable and sustainable.

“I should be allowed to eat things that I like… I eat chocolate almost every day… I’ve tried to make sure that these are lifestyle changes and that I can maintain it forever.”

Big Loz is now eating four to five meals each day, while his diet is not always the same. His diet usually involves oats, mince (ground meat), pasta, steak, potatoes, with some carbs before his training to feel energized.

Laurence Shahlaei revealed that the hardest part of the entire journey was understanding that it will take a lot of time. Despite receiving compliments from others, Big Loz was still unsatisfied. Although he has lost some strength, it has not adversely affected him considering that he has become fitter and healthier as a result.

“As individuals we tend to look at our worst features and I’m trying to improve that side of me. I try to focus on things I like to see in the mirror, rather than what I don’t like… I haven’t trained for strength. I would guess that my strength is around 20 to 25 percent down from my absolute best.”

Currently, Laurence Shahlaei is on TRT (Testosterone Replacement Therapy) to maintain his testosterone levels as he ages. Nevertheless, he does regular blood tests to monitor his health.

“I’m on 125mg of test a week. As you get older, your natural testosterone levels drop… It allows me to have a bit more energy and maintain a bit more muscle mass.”

As far as his future bodyweight is concerned, Big Loz has set a limit of 130 kilograms (286 pounds) and he will train hard to stay within it. However, that should not be a problem, seeing that Laurence is doing a lot of cardio.

“I have done an hour and a half cardio session without batting an eye… I can walk all day now… Doing Strongman, I would drive everywhere.”

During his 14-year-long career, Laurence Shahlaei took part in 65 International and National Strongman competitions and won 11 of them. Big Loz has also made 11 appearances at the World’s Strongest Man contest, which saw him go through to the finals five times. His best placing at the WSM was fourth in 2011.

Big Loz has massive plans for the upcoming year, as he will take part in the 2023 British Masters, a Push-Pull powerlifting meet, a Dinnie Stone World Record attempt and compete at the 2023 Masters World’s Strongest Man. However, he does not plan to go back to competing professionally and will be doing all this for fun.