Big Ramy gives a physique update with five weeks to go until the 2020 Mr. Olympia, and he looks solid 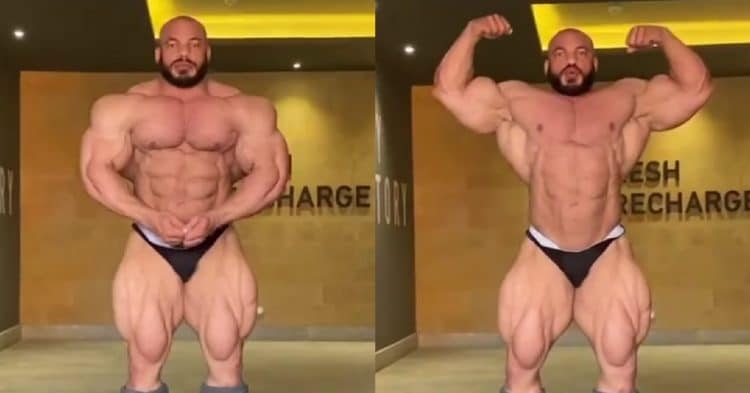 The 2020 Mr. Olympia is rapidly approaching, and fans can not wait. Big Ramy gave a little preview of what can be expected from him, and it has everyone buzzing.

Within the bodybuilding community, there has been a bit of controversy surrounding Ramy and his addition to this year’s Olympia roster. This comes from him being granted a special invitation for the event, despite not qualifying through traditional means. However among the fans, there does not seem to be any concern about how he got there. Instead they are just excited to see him back in action against the best in the world.

As the months count down to the 2020 Mr. Olympia, Big Ramy has been working hard to prepare. He decided to share a little preview of his physique with a recent update to his Instagram. Here the Egyptian bodybuilder dropped trou in order to give a glimpse at his conditioning five weeks out. He hits a variety of poses, giving a pretty complete view at how his progress is coming along.

” I was after that win in spain to get qualified but thanks to @mrolympiallc @ifbb_pro_league @dansolomon_official i got that invite.. I saw a lot of people talking about how my forearms lacked veins on the videos i posted 🤔…i didnt answer the “views chaser”.. I wanna thank my fans for always having my back and supporting me… let them do their work im doing mine and insha Allah my God will facilitate a greater win than @npceuropean see you guys in 5 weeks.. Call me the Dream chaser!!”

This is by far the most detailed update that we have seen from Ramy in a long time. The closest thing we got before was a few pictures of his back around 3 weeks earlier, just before he got the special invitation. Although there is not much difference in time, the improvements he has made are clear, even just comparing this small area.

“Back to track 💪🏽thanks for all my fans , friends and my family for prayers 🙏thanks for 🐉 dragon pharma for support ❤️”

There have been some questions about what condition Big Ramy will be in when he steps on stage at the 2020 Mr. Olympia, which is something he alluded to. Yet with five weeks to go, it seems that he has really amped up the training and preparations for this show. He is another big addition to this year, and it will be interesting to see how he looks compared to the likes of Brandon Curry, Phil Heath, and others.