Big Ramy is happy to be posing on stage again after having been away for 2019.

Big Ramy’s future was uncertain after a disappointing 6th place finish, at the 2018 Mr. Olympia competition. He came in second to Phil Heath in 2017 and many people were worried he wouldn’t bounce back.

But since the beginning of 2019, Ramy was suffering from some shoulder issues and rumors spread that he wouldn’t compete of which he denied.

And he never did compete in 2019 so the rumors weren’t far off. His coach Neil Hill explained that Ramy should take the year off and get himself together and so it seems that he may have listened to the advice. But he’s still training and has been recovering nicely from the shoulders issues.

Big Ramy will likely be out of the 2019 Olympia unless he receives a special invitation since he didn’t actually qualify for the contest. But he recently made a guest pose appearance at the Victor Martinez Legends Championships and is happy to be on stage again.

“Guys, feels good to be back on stage even if its just for a guest posing but its always a great feeling and i will be competing very soon to bring my best shape ever insha’Allah…

I wanna thank @ifbbvictormartinez for having me here in his Legends Champions in New York.“ 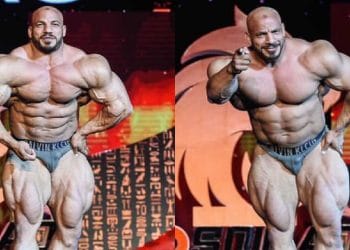 Big Ramy put on an incredible performance to win the 2021 Mr. Olympia, and defend his title. Now, for the...

Big Ramy was able to capture his second Mr. Olympia title a few weeks ago, beating a variety of competitors...

Bodybuilding is a huge sport in Egypt, and as a result Big Ramy is something of a national hero. This...