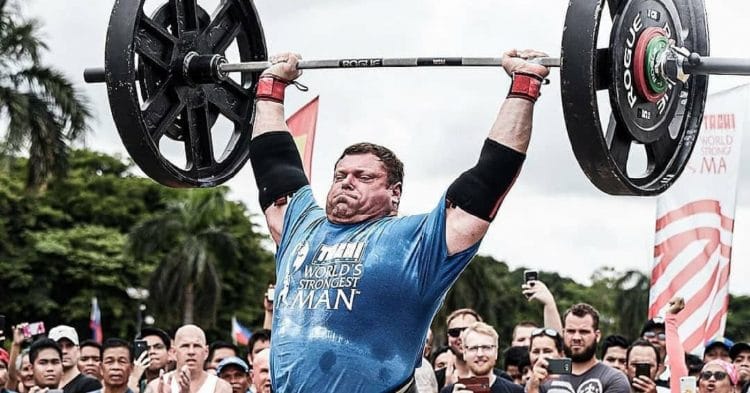 The 2020 Static Monsters Worldwide has concluded, and somewhat surprisingly Big Z, Zydrunas Savickas scored some big wins. However he was far from the only standout performer at this event.

The Static Monsters event is a popular online-only strongman contest that features athletes completing the log press and axel deadlift. The 2020 edition of this competition saw 771 men and 224 women from over 20 countries take part. In the end, some contest records, as well as potentially some world records were broken, with some big names walking away with victories.

Although it was not surprising that Big Z was able to perform well in the contest, it was a bit unexpected for him to win both the Men’s Open and the Master’s Division. The 45-year old landed a 610kg total from a 195kg log lift and 415kg axel deadlift, submitting these numbers for both divisions. The log lift and total set new Static Monsters Worldwide records for the Master’s Division.

There were other standout performers at this contest, besides Zydrunas. In the -80kg division, Nicholas Gagnon hit a new world record with a 145kg log lift, even though he did not win. Additionally in the Men’s Adaptive division, Tobias Anthofer etched himself into record books with a seated axel deadlift of 632kg.

Below are the full men’s results, including the log lift, axel deadlift, and total. Moreover, new records for the Static Monsters Worldwide will be in bold, with an asterisk marking world records.

While Big Z was the big winner on the men’s side of things, Sharon Moss stood out the most for the women. In her first victory at the Static Monsters Worldwide contest, the American strongwoman had better numbers than every other woman in both the log press and axel deadlift. This saw her scoring a 406kg total, made up from a 99.8kg log press and 306.2kg axel deadlift.

There was also a potential world record set during this contest. In the -72.5kg division, Leah Burdsall log pressed 113.4kg which is thought to be a new record. Although that has yet to be verified and confirmed as official.

Below are the full women’s results, including the log lift, axel deadlift, and total. Due to the uncertainty surrounding Burdsall’s potential record, it will not be noted. However new Static Monsters Worldwide records will be bolded.

Congratulations to Big Z, Sharon Moss, and the rest of the winners at the 2020 Static Monsters Worldwide. This year’s contest served as a reminder for how good this event is, and it left us with some big performers by the time it was over.