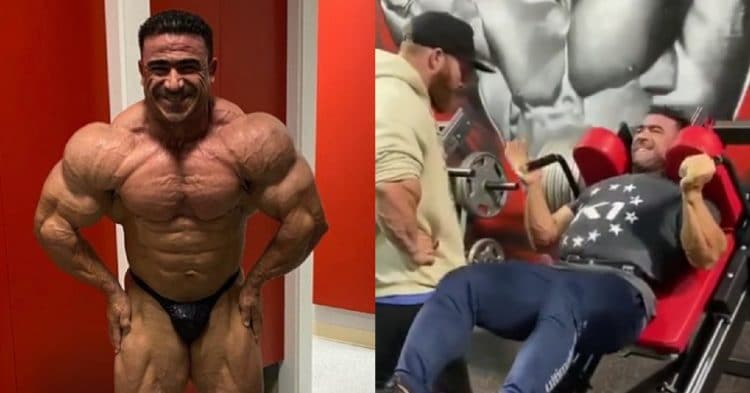 Reigning 212 Olympia champ Kamal Elgargni will not be competing against Flex Lewis at the Olympia anymore. So they decided to work together a bit as Kamal preps to defend his title.

For years, Elgargni had been working hard to find success in the 212 Division, before the 2019 Mr. Olympia. It was here that he finally found his peak, winning the show and even considering retiring after the fact. In the end however, he would choose to stick around in the sport and try defending his 212 Olympia throne. So as the event draws closer he has looked incredible, seemingly jacked and ready to retain his throne, despite tough competition like Derek Lunsford and others in front of him.

However with just a few weeks to go until the show, Kamal Elgargni decided to bring in someone special to help him train. Former 212 Olympia champ Flex Lewis was planning on making his Open debut at the 2020 Mr. Olympia until he was forced out due to injury. Yet he still managed to find the time to work out with his old rival, when Kamal came to train at the Dragon’s Lair. Kamal shared a video clip from this session to his Instagram, showing the pair engaging in some leg work.

“Lag day @the_drsgons_lair It’s great when you have the right people around,” Elgargni wrote in the post.

This was not the only update that came from these training sessions between Flex Lewis and Kamal Elgargni. Coach to the stars, Chris Aceto also posted to Instagram, sharing a physique update from the 212 Olympia winner. Although the lighting is admittedly not the best, it is clear that he is looking shredded and Olympia-ready with just under seven weeks to go until the show. That lines up exactly with how he was saying that his training was going for the event.

In this post, Aceto tagged pupils Flex Lewis and Shawn Rhoden. The comments saw Flex joke about how poor the lighting is, but how good he looks anyway. Shawn chimed in to joke around as well.

Flex: ‘Chris why you posting this it’s terrible lighting’

Chris: ‘Oh Flexy no one needs to see Kamal in good light they not ready’ Lewis commented.

“@flex_lewis sounds just about right, coming from Chris…. if you look good in bad light it’s lights out it great light 💪🏽💪🏽” Rhoden chimed in.

It is good to see Kamal Elgargni getting some work in with a variety of athletes heading into the 2020 Mr. Olympia. He has looked good in training this far, and it seems like he is pulling out all stops for this camp.