'Thor' achieves a pr and an unofficial world record a weeks out from the 2020 Arnold Classic! 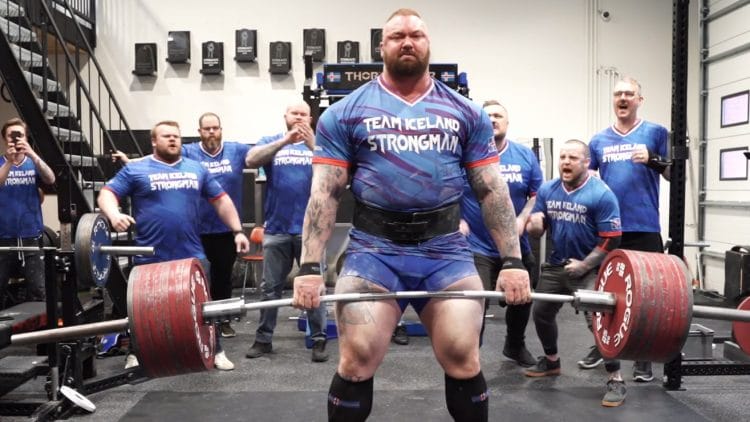 Now, Bjornsson is the current Elephant bar record holder with 474 kg (1,045 lb) and although this personal record would earn him a competition best, if he achieves a 501kg/1104lb deadlift, he’ll surpass Eddie Hall’s all-time deadlift world record of 500 kg (1,102 lb; 79 st) which was set under strongman rules with lifting equipment in 2016. And although Hall’s record was set on a standard deadlift bar (there’s a difference), a 501kg Elephant bar deadlift would still be considered the most weight ever pulled.

Watch the lift below…

We’ve posted the entire video from YouTube below if you’d like to check that out as well. In the video, Bjornsson pretty much gave a quick update on his progress and then he went straight into it doing multiple warmup sets before attempting the big pull! His last warmup set was 434kg/955lbs and even he acknowledged that it sounds crazy to refer to that much weight as a warmup set. But when you’re an elite Strongman competitor like he is, it sounds about right.

So at this point, EVERYONE showed up to watch Thor attempt the unofficial world record lift but first breezed past his last warmup and then the moment everyone was waiting for… the lift is at the 9:00 minute.

The gym was absolutely hyped and no one left disappointed as Bjornsson fought to get the weight up. Afterward, he talked a little about the lift and his plans for the Arnold Classic.

“I’m so, so, so happy with my lift. Unofficial world record raw with straps. No one in the world has ever pulled this weight before off the floor. This puts me in a very comfortable and good position going into the Arnold Strongman Classic.”

Bjornsson was about to share what his first attempt will be at the Arnold but he decided not to. However, he did share his second attempt which will be 475kg which would be a competition personal best and he thinks it’ll probably be enough to get him the win. But he’s going to see how he feels going into the third attempt which will determine the weight he chooses.

But if he has to back off he will if he feels it’ll be the best thing for him to do to ensure he wins the contest. Surprisingly though, Bjornsson felt like this training pr wasn’t that hard except maybe a little when the bar reached the knee. However, it was smooth other than that.

Hafthor Bjornsson is feeling good right now and if he maintains this we may see a historical performance from him at the 2020 Arnold Classic. But we already had suspicion this might be the case when just a few weeks ago, he nailed a 455kg/1,003lb deadlift x 2 which had people talking.

Be sure to stay connected for more Strongman news as we’ll be sure to provide updates as the 2020 Arnold Strongman Classic approaches.