Bobb Matthews scored the highest DOTS score of the USAPL this year, as his result came out to 582.796. 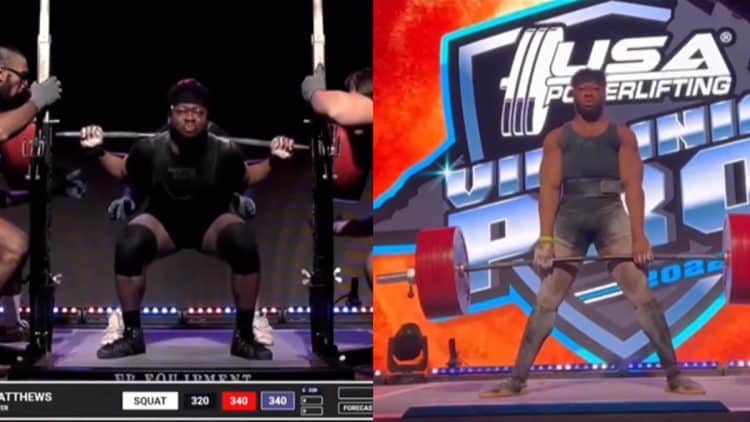 On Saturday, December 10th, 2022, one of the biggest USA Powerlifting (USAPL) competitions of the year took place. A one-day powerlifting contest, the 2022 USAPL Virginia Pro took place in Ashburn, VA, bringing together only the best athletes in the country. Bobb Matthews ended up coming victorious in both his weight class and overall divisions. That earned him a prize of $5,000.

Competing in the 105-kilogram weight class, Matthews faced tough competition from Ashton Rouska, a seasoned powerlifter who had won numerous titles in the past. The two men went head to head in a series of grueling lifts, each pushing themselves to the brink of exhaustion. In the end, it was Matthews who emerged victorious, scoring a DOTS score of 582.796, higher than anyone in the USAPL this year.

This was the heaviest that Bobb Matthews ever entered a sanctioned competition, as his exact bodyweight came out to 101.4 kilograms (223.5 pounds). He did not set new national records, but did score three new competition PRs, as well as equal his squat competition PR.

“The underperformance was crazy. The platform was unexpectedly bouncy and I wasn’t ready for that. Was expecting 350-355 kilos. At the very least.. Meet PR tied.”

“My most satisfying lift ever. Officially a 500lb bencher. From being the first in the flight to bench to the LAST!!!!
I left about 5 kilos in the tank. Bench is lowkey becoming my best lift.”

“Deadlifts were effortless. The original plan was 385kg for the deadlift WR, AND total WR.. but 380kg was all that was needed to secure the win. That was more important.”

This was just the seventh professional powerlifting appearance for Bobb Matthews, who is starting to pick up the pace with two wins in a row. Those are also his only wins, as the other competition apart from this 2022 USAPL Virginia Pro was the 2022 USAPL Mega Nationals.

Bobb Matthews wanted to attempt to set a new deadlift World Record, but he decide to lift exactly as much as he needed to win, rather then going for a heavier pull and putting everything at risk. However, Matthews still has a long and bright future ahead of him, so he will have many opportunities to claim that desired deadlift World Record.