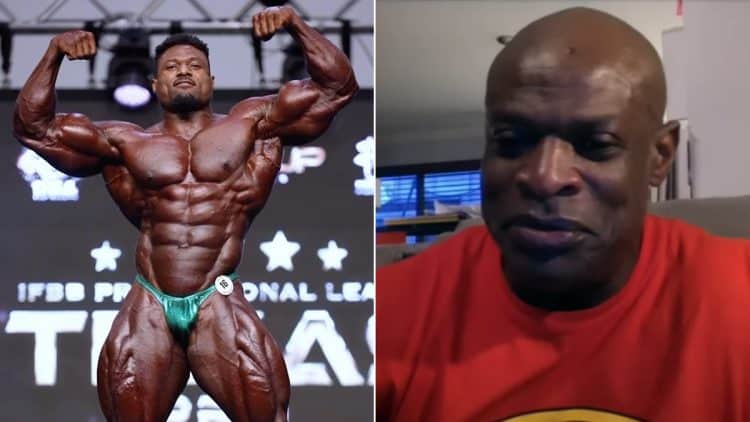 Rising star Andrew Jacked (real name Chinedu Andrew Obiekea) made his way up the ranks throughout the season and plans to put on a show at the upcoming 2022 Mr. Olympia. Speaking with bodybuilding legend Ronnie Coleman, Jacked discussed 2022 Mr. Olympia prep and his retirement plans.

Obiekea led one of the most successful rookie seasons the sport has seen. In March, he won the Amateur Arnold Classic title under the tutelage of four-time Arnold winner Flex Wheeler. He took that momentum to the 2022 Texas Pro months later, where Andrew got the chance to face other IFBB pros for the first time. Jacked defeated veteran Steve Kuclo and rising Men’s Open talent Martin Fitzwater on his way to victory.

In Sept., Jacked competed in Europe at the 2022 Arnold Classic UK even though he qualified for Olympia (courtesy of his Texas Pro victory). While he faced resistance from runner-up Patrick Johnson and James Hollingshead, Andrew again walked away with gold.

Despite being relatively unknown at the beginning of the year, Andrew Jacked asserted himself as one of the top debutants slated to compete at the 2022 Olympia, which is set to kick off this Thursday (Dec. 15-18).

In addition to showcasing intense training sessions with retired seven-time 212 Olympia Flex Lewis, Jacked has reiterated since starting Olympia prep that the ‘best has yet to come.’

Ronnie Coleman, one of the most dominant and strongest Men’s Open bodybuilders ever, is keeping fans informed leading up to the contest. Ahead of the event, Coleman spoke with Jacked about his current season, prep, and future in the sport.

Unlike some of the competition, he will face, Jacked mentioned he didn’t get a full off-season this year to help with improvements. Moreover, he revealed that he’s been struggling with a common cold.

“I don’t know. I have no idea. I have no idea because it’s my first time. I mean, I can’t compare myself to most of these guys who have been [in the] off-season since last year or any of this year, the bitter long off-season. Me, I’m just like what, back-to-back-to-back shows.

You know, health, deterioration here and there — but I’m not worried. I will just take whatever comes out. I’ll give my best. It’s [been’ a high run this year because I’ve had no off-season this year. I did three shows. The [2022] Olympia will be my fourth show. I didn’t win [those shows], I smashed them.”

He looked back on his latest season and shared that he got sick following his strong performance at the Arnold Classic UK. He said he just had his final shot of an antibiotic treatment.

“Everything. Hats out to you guys and everyone who is in this business — this industry, hats out to all of them because it’s not been easy,” says Andrew. “Yeah after the UK show, I think my body stopped. I took a three- week break.

I got back from prep and I was doing good. On the ninth of November, I was hit with the cold. I was pushing through it nice and easy just trying to still train but not like crazy. But I think now I’m good. I just got my last shot of antibiotics.”

According to Andrew, George Farah hasn’t been able to crack his ‘diet’s code’ in preparation for his first Olympia contest.

“Flex and George [Farah] haven’t been able to crack the code yet [with my diet and food], because we haven’t gotten an off-season. We just take in food that my body can handle. We just take in four meals and one shake, that’s five and that’s it. We are just sticking to that until after the Olympia and then we will just go for a full off-season and start fresh from the beginning.”

Andrew Hints at Retirement with Ronnie Coleman: ‘Once I Win The Olympia, That’s A Wrap’

Once Jacked wins the Olympia title, he plans to step away from the sport. He added that winning multiple Olympias would just be repeating the same accomplishment.

“I think for now… I’ve achieved what the sport has — I mean, I won my first pro show and qualified for the Olympia, it’s in the books. I’ve gotten my pro card already and I’ve won the Arnold Classic already. So, I think the only thing missing is just the Olympia. I guess the Olympia and it’s a wrap because I don’t think there’s anything more to win. It’s just like repeating it over and over.”

Andrew shared that he may pursue a career in electrical engineering again should he decide to stop competing as a bodybuilder.

“It’s still the same thing [for me]. I’m an electrical engineer, I could go back to school again. For me, it’s just to accomplish what needs to be accomplished and maybe create a record that no one has — because I don’t think anyone has my record in seven months — having their pro card. Yeah, no one has it.”

Like Jacked, Michal Krizo also earned his pro card and Olympia qualification in an extraordinarily short window. The Slovakian mass monster won the Amateur Olympia Italy contest and the 2022 EVLS Prague Pro all in the same month of October.

Looking at the Men’s Open lineup for 2022 Mr. Olympia, Jacked said he would be happy with a top 10 finish. Furthermore, he mentioned that Big Ramy would be fighting for second place at the 2023 edition of the event.

“If Ramy tries to compete next year, I’ll be so happy. Honestly, next year, when I’m coming… I think everyone will be fighting for second place. The same [top three] from last year, nothing is changing. I don’t know [where I’ll place at 2022 Olympia] but I definitely think I’ll crack the top 10. I’m not looking at where I’ll place — I’m just going there to be happy and have fun with the guys and that’s it.”

It appears Andrew’s prediction isn’t too far-fetched. Recently, retired IFBB pro, ‘The Real Deal’ Chris Cormier gave the lowdown on how he imagines 2022 Mr. Olympia playing out. With so much new talent combined with last year’s contenders, Cormier envisioned Andrew Jacked ‘realistically’ placing in the top 10.

RELATED: Flex Wheeler: ‘If Big Ramy Comes in The Way He Looked Last Year, I Think He’s Going to Have a Problem’ With Andrew Jacked

Despite the expectations around him, Chinedu Andrew Obiekea is just happy to perform at his first-ever Mr. Olympia contest. Unlike the ambitions of Ronnie Coleman, Andrew hopes to win a lone Mr. Olympia title before sailing off into retirement.