Aaron Reed confirms he played the even more jacked version of Ryan Reynolds in the 2021 film 'Free Guy'. 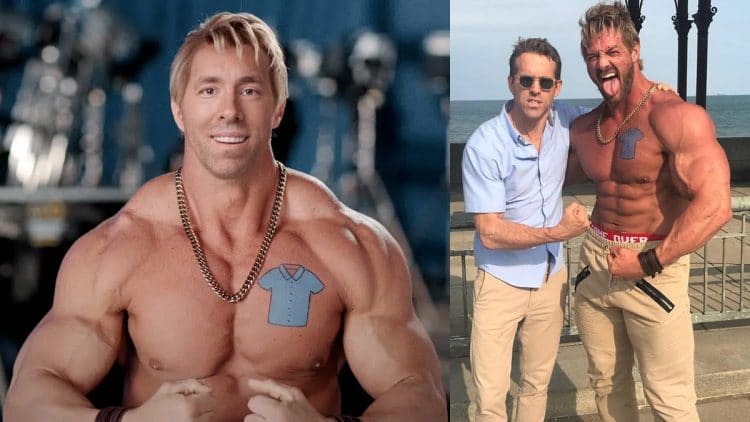 If you saw the action-comedy ‘Free Guy’ starring Ryan Reynolds and are like us, you probably laughed your butt off… oh, and, of course, you were probably also dying to know whose body they chose for the character ‘Dude,’ who played the incredibly jacked counterpart of Reynolds character Guy (because Reynolds is pretty jacked himself) in a few scenes.

To answer your question, (and if you forgot to check the ending credits) it was bodybuilder Aaron Reed.

The recently released movie (totally worth the watch), delayed due to Covid, was about a bank teller (Reynolds) who learned he’s a non-player character (NPC) in an open-world video game of which he eventually becomes the hero in the very out-of-control, free-for-all world.

Reed (Dude), the much bigger and unfinished copy of Reynolds’ character, had a small part in the movie (or at least his body did) but it was mostly during a fight scene, and where his lack of intelligence becomes evident.

Standing at 6’7″ tall with a mind-blowing physique, Reed has won bodybuilding competitions and has also wrestled for WWE. In an Instagram post of him posing for a photo next to Reynolds, the actor was thrilled to have been able to play the part (a pretty comical part at that) and he enjoyed every bit of it.

“I had a blast working with @vancityreynolds on set making @freeguymovie !! It was so much fun! Even though I had a small part, I knew the movie was gonna be great from day one.”

Earlier this month and to promote Free Guy, Reynolds took to YouTube where he shared a preview of “Next Level Reynolds”, aka Dude. In the clip, he totally took all the credit for the massive muscles you saw on the big screen while flexing his guns for the camera.

“I do know you hear actors complaining about how hard their movie workouts are,” he said in the clip. I don’t have time for that. I’ve been at this one week and I’ve got to tell you… it’s coming in nicely.”

He shared his nutritional secrets for getting in such amazing shape.

“I start every day with a protein bomb made exclusively of human muscle, it’s completely organic and illegal.”

Next Level Reynolds didn’t break character once and embodied Dude, saying he wouldn’t fit into the Deadpool suit anymore and that life is all about growth.

In the caption under the video he posted to YouTube, the A-list actor wrote “2021 has been a real growth year for me – mentally, emotionally and hormonally.”

It has been indeed!

In coming up with the character for dude, Director Shawn Levy told Brandon Davis of Comicbook.com that Dude wasn’t initially planned to be included in the film but he and Ryan Reynolds thought it’d be a good idea to have him fight himself.

“What we did was early on, we had this idea, Ryan and I. This character was not in the script, but we had this idea, what if Ryan has to fight Ryan? But what if it’s an upgrade? What if it’s Ryan 2.0? Taller, more muscular, more hairless, more streaks and tips hair, so we literally cast a bodybuilder out of LA. And his body was just sick and massive, and he made Ryan look like a fragile little feather.”

“So, we cast this dude, Aaron Reed, and Aaron did the whole movie with dots on his face. Those are tracking markers. Later then, we put Ryan in a motion capture device called the egg. It all sounds very futuristic. We were like, “Ryan, enter the egg.” And it’s a machine where Ryan then did every line as Dude looking at lights in the motion capture egg, and then we digitally cut and morphed Ryan’s real face on Aaron’s body.”

Reynolds also talked about his ideas for the hulking character who played his alter ego in the movie. And coming up with the concept for Dude was freaking hilarious, to say the least.

“It really came to be just Shawn and I sitting in my apartment in New York and going, ‘We need something for Guy to fight, to physically fight against’, because the enemy in the real world is Taika Waititi’s character of Antoine, and we’re never going to face off, so we have to find some anthropomorphic sized version of Taika’s character to fight. And that’s where we came up with Dude, which would just be an upgraded version of my character. And how do we upgrade him? We give him bright, white Chiclet teeth.”

“You give him about an extra 180 pounds of muscle on top of what I would already have. So the guy weighs 300 plus pounds. He’s six foot seven. He’s tan. He’s gorgeous. He’s got his frosted highlighted hair, and that’s our guy that’s going to come into the game to just completely kick the ever-loving sh*t out of my character, Guy. And we loved this concept and this idea as soon as it came about. So from then on, it was just the fun part of just manifesting the reality of it.”