Powerlifter Leroy Walker strict curled 114 kg/250 lbs on Saturday for a new all-time world record. But Russia's Nizami Tagiev does not believe the lift should have counted. 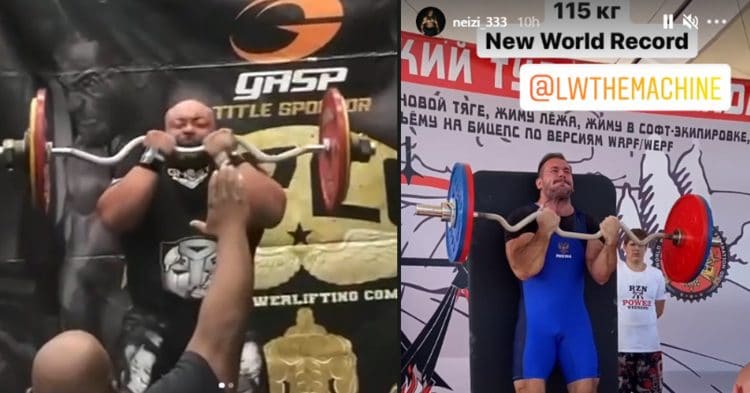 There’s a new strict curl all-time world record holder in town and his name is Leroy “The Machine” Walker. The Washington-born powerlifter with an impressive 675-lb bench press curled a massive 114 kg/250 lbs at the Johnnie O. Jackson Classic, on Saturday, August 28, 2021.

Denis Cyplenkov of Russia previously held the all-time strict curl world record of 249 lbs/113.5 kg from 2015, so this lift beat that number by about a pound.

Walker shared the 250 lb strict curl video to his Instagram and you can watch it below.

The lift, however, caused a little drama in the strict curl community. Following his record performance, Nizami Tagiev of Russia put up a video of him strict curling what the caption on the video claimed to be 115 kg, one kg more than what Walker did.

Tagiev’s strict curl was not confirmed, while Walker’s lift was during an event sanctioned by the National Powerlifting Committee (NPLC), and is, therefore, the all-time world record.

The latter acknowledged that even though his lift is/was claimed to be the world record, Tagiev may have the record, if the lift gets confirmed.

Here’s what the caption read:

“250lbs/114Kg. New American / New World Record. (8/28) crazy times. As of yesterday & when I woke this is/was the WR. There are reports that @neizi_333 set a WR @ 115 but I haven’t seen it confirmed. If so huge congrats. I stated earlier this month that my attempt was to chip my American record 226 and get into the 240 range. I honestly knew @neizi_333 was competing and the record would be greater than 249 @cyplenkovden . Much respect to him. His curl resume is legendary . Well @strict_curl_nation @wrp_official @ghoststrong @nicksstrengthpower @powerliftingmotivation WE NOW have an ARMS RACE !!! STAY TUNED!!!“

But Tagiev took to Instagram today where he rejected Walker’s strict curl, questioning his form, the wall, being handed the barbell, his grip width, and even the amount of weight.

Here’s what he wrote on social media…

“I don’t wanna be a hater!
I just want to say that if everyone compete for the world record then the rules should be the same for everyone.

I believe that LeRoy @lwthemachine is a strong athlete, but I do not recognize his record, just as Denis Tsyplenkov @cyplenkovden does not recognize him. This is not pride or vanity! If I saw a clean rise there, I would strive for it simply and accept the challenge with dignity!
There’re too much questions:
the elbows are bent too much, the assistants serve the barbell, the grip is narrow, the wall is narrow, honestly I have a lot of distrust of the weights on the barbell.

I ask the organizers of the Arnold Classic, @arnoldsports which will be held in March ‘22 in the USA, to be seriously about all of that🙏🏾 I repeat once again, the rules and judging should be the same for everyone! I am for fair sport and for justice! Respect for all athletes from different countries! And let’s be honest with ourselves firstly!

If you’re agree with my thoughts, repost it!

Now, for those who don’t know, the strict curl used to be a contested lift in a powerlifting competition. The head, upper back, and butt must remain against a wall throughout the entire lift, curling the weight up and lowering it back down. That makes the lift a lot more challenging compared to a freestanding curl. Additionally, it can be done using a straight or EZ curl bar but the latter is typically used for this lift.

Tagiev and Cyplenkov have both said that they do not recognize Walker’s lift and the post explained that the rules should be the same for everyone attempting the world record, implying that Walker’s curl was not as strict.

Nick Miller (Nick’s Strength and Power on YouTube) posted a video to his YouTube channel and agreed with a lot of what Tagiev wrote in the post.

For now though, we will have to see how things unfold.