Arnold Schwarzenegger included the controversial topic in his recent newsletter where he shared more of his thoughts on the situation that caused tons of backlash. 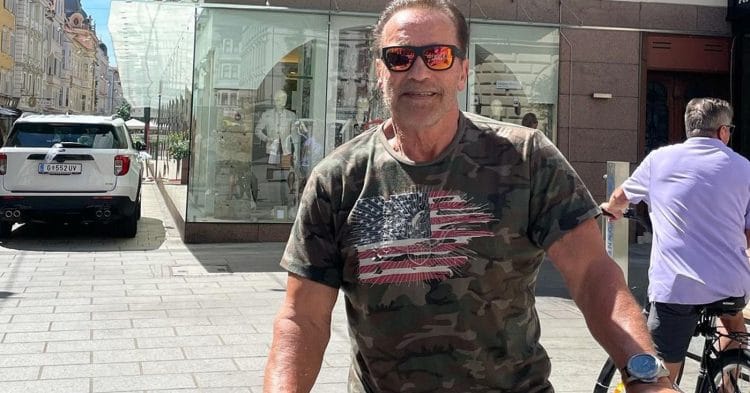 At 74 years old, Arnold Schwarzenegger shows no signs of putting his foot on the brakes of life. The former Governor of California regularly puts out his newsletter where he shares the many things going on in his world and he’s got lots to say. But it’s no surprise he addressed the elephant in the room once more; his controversial “screw your freedom” statement during a CNN interview regarding the Covid situation.

The comment caused major backlash and it also lost him many longtime fans.

As you’re probably aware, the action movie legend has been vocal about the importance of taking the necessary safety precautions during these difficult times. In a previous newsletter, the bodybuilding legend admitted that it’s the only subject that can make him lose his temper.

He also admitted that what he said may have been a little much, even if his opinion about the situation didn’t change. But something to this extent isn’t forgotten so quickly and will probably be talked about for a long time.

In Schwarzenegger’s recent column, he addressed the reactions to his comment again, saying that news outlets “decided to take one line out of a conversation and run with it” and that some fitness influencers decided to no longer support him, which he’s fine with.

But he insists that the comment was taken out of context.

“That’s fine! They have the right to choose clickbait instead of informing their audience.

If they listened to the whole quote, they would have realized that I am talking about all of the whiny babies that I see going viral on the internet who think that being asked to put on a mask is a perfect reason to throw a toddler fit in a grocery store and look like an absolute child,” wrote Schwarzenegger.

In the CNN interview and in his previous post, Schwarzenegger placed an emphasis on the importance of responsibility as an American citizen.

“These are people who yell “FREEDOM” in their American flag hats while not taking any time to study the history of our nation and how freedom and duty have ALWAYS gone hand in hand. They think being an American means not caring about their fellow Americans, and I’m sorry, I can’t accept that.”

Following his remarks, the CEO of supplement brand REDCON1 Aaron Singerman decided not to sponsor any Arnold events.

This was also acknowledged by Arnold in the newsletter.

“With all of this going on, it was a wild week! One of my favorite strongmen I’ve ever worked with took my poster off of his gym wall, then a bodybuilder who played me in a movie copied that move, which wasn’t very creative. We lost a sponsor of the Arnold Sports Festival, we added new sponsors immediately.”

But despite all this, Arnold feels lucky to be in this country.

“When the worst thing that happens to me this month is some people yelling at me, then losing a sponsor for the Arnold Sports Festival, that’s when you realize how lucky we are to live in this country.

In fact, if nothing else, this whole episode has made me say, “I love this fucking country.” Because you know what? All of these people have the right to complain, and they won’t be sent off to prison. And I have the right to say what I believe. That’s beautiful.”

Schwarzenegger says this was a learning experience for him and especially regarding how media outlets respond to situations like this.

“A lot of our news sources, whether it’s social media or mainstream news, and whether it is left or right, prefer that you’re emotional instead of informed.”

He points out that many are only concerned about their feelings instead of being more open-minded and coming together to take simple steps that can help slow down the spread of Covid.

“We are constantly choosing our feelings over learning and being open-minded to other ideas. We haven’t been able to come together around very simple steps that can help prevent the spread of this disease. That makes me worry about how we would respond to an even bigger challenge. We have to stop making everything political, or we will be in big trouble when the next crisis strikes us. We have to be able to come together.”

Arnold also talked about wearing masks and how there is no infringement on freedom when someone is asked to wear one.

“If you are someone who thinks masks are an infringement on your freedom, can I ask what happens to you when you get caught not wearing a mask? Is it that you are politely asked to put one on? Or is it that you may be asked to leave the business if you refuse? At worst, you might have paid a fine? Was your freedom really taken away? Think with your learning brain, not your emotional brain right now. Even in the worst case, if you paid a fine or got kicked off an airline for refusing to wear a mask, did you lose your freedom?”

“We can see limitations on freedom all around us, because that’s how society works,” Schwarzenegger writes. “It is how every society since the beginning of civilization worked, and the United States, with all its flaws, is the pinnacle. We will always have more work to do, but that’s part of what makes us great.”