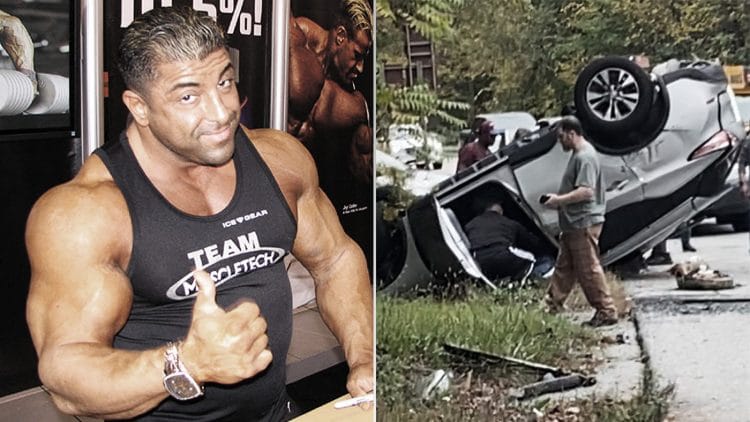 How likely it is to be in a situation that requires a person with immense strength to resolve and having him there to help by sheer coincidence? Not very likely. However, bodybuilder King Kamali was able to help a car accident victim in an incredible feat of strength recently by sheer coincidence.

The Iranian-born bodybuilder explained a recent incident in an Instagram post this Wednesday. While driving with his daughter, Kamali came across an accident where the car was upside down with the victim trapped in it.

The bodybuilding ace ripped the car door with bare hands to reach the victim and lifted the car to free her hand trapped underneath it. Sadly, the victim’s legs were broken and her left hand had to be amputated. However, Kamali managed to save a life and stayed with the victim through the entirety of the incident.

“Jesus Christ people… I’m still in shock. Thanking God right now for the strength he has blessed me with because it took everything I had to lift this car off of her arm. Left hand amputated and legs broken but I stayed with her the entire time. The only way to get to her was to rip the fucking door off and I did.” King Kamali wrote.

As explained in the caption of another post, Kamali suffered injuries to his hand. But he admitted that it was every bit worth it to help another human being. An incident like that is bound to leave a lasting impression on a person’s mind because big men have a soft heart too. King Kamali wrote that it will be tattooed in his memories forever.

“2 jammed, 1 dislocated and 1 fucked up.. battle scars from yanking a car door off the hinge. It was worth it helping a fellow human being in need. #kingsworld”

“This one will be tattooed I my memories forever… so fucking bad!!! #lifeisprecious” King Kamali wrote.

It was King Kamali’s incredible strength that helped him save another life. However, one has to revere the fact that it was his courage and empathy that compelled him to act.

Who is King Kamali?

Shahriar Kamali was born and raised in the Iranian capital Tehran in 1972. He later moved to the USA where he made a successful career as a bodybuilder. King Kamali’s bodybuilding career spans12 years. Kamali won his debut at the 1994 NPC Collegiate Nationals as a Light Heavyweight. He then went on to participate in 20 competitions till 2006. After finishing 15th at the 2006 Atlantic City Pro, The Terminator retired from bodybuilding.

King Kamali participated in Arnold Classic three times – in 2001, 2004, and 2005. His best standing came at Arnold Classic 2001 where he finished 4th overall. The Terminator left his mark in the Ironman Invitational, finishing 4th and 5th in 2001 and 2005, respectively. The best standing of Kamali’s career, however, came in the 1999 NPC Nationals where he won the gold medal.

Kamali is a George Mason University alumnus where he gained a Bachelor of Science degree in exercise physiology. The resultant knowledge of Kinesiology (the scientific study of human body movement), sports nutrition, and distinctive posing styles separate him from the pack.

King Kamali has been a vocal proponent of improving bodybuilding as a sport overall since retirement. PED usage is one of the most talked-about and controversial topics in sports today. King Kamali’s opinions on the matter have created a lot of stir in recent times. In a Q&A session with Generation Iron in 2020, Kamali admitted to having taken ‘massive, massive amounts of drugs’ in preparation for Mr. Olympia. Irrespective of the general reaction to Kamali’s claims, it is hard to debate that he has nothing but genuine concern for athletes’ health in his mind and wants the sports to improve for the better.