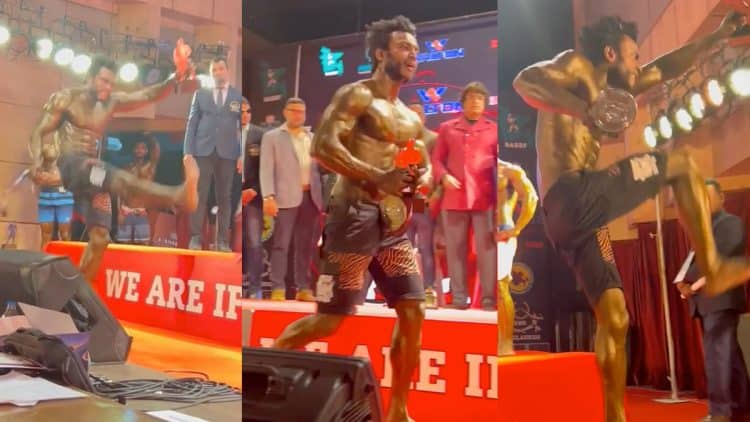 Bodybuilding is no easy sport as the athletes have to put their bodies through extreme workouts and diets to get ready for competition. Emotions tend to fly high as competitors line up on stage to battle it out for the grand prize. In a recent video uploaded on Instagram, a Bangladeshi bodybuilder lost his cool when he finished runner-up. As a result, he threw the prize (a blender) and even kicked it twice in a fit of rage.

Jahid Hasan Shuvo, a professional competitor in Bangladesh, participated in the BABF National Bodybuilding Championships 2022, held on Dec. 23 last year. He was targeting a win at the show and was confident he brought the right package. However, the show’s judges did not agree with him as they gave him second place.

Another competitor, presumably the winner of the show, can be seen exalted when Shuvo’s name comes up for the runner-up place during the announcement ceremony.

A dejected Shuvo looked at the crowd in attendance in disbelief after the announcement before making his way to collect the trophy and a blender machine. He did not seem interested in getting a few photos taken with the organizers as he paced back and forth on the stage. One of the hosts asked him to step aside and told him to walk off the stage.

Shuvo complied but not without giving them a piece of his mind. He got off the stage and immediately threw the blender machine in a fit of rage before kicking it twice out of frustration.

In a recent Instagram post, Jahid Hasan Shuvo went viral for his unsportsmanlike antics at the show. He later clarified that he was pushing back against the corruption and bias of the Bangladesh Bodybuilding Federation (BBF).

“This was a kick at corruption. Any kind of corruption in any place in our country,” he told the media. “Even a child could tell the difference in physique between me and the winner. However, I would like to apologies for my reaction, because without context, it looks unpleasant for a sportsperson to do that.”

The BBF responded with a lifetime ban on Shuvo after discussing the matter with the International Federation of Bodybuilding (IFBB) on Dec. 25.

Former Bangladeshi bodybuilder Haji Peyar Mohammad, who served as a judge at the show, weighed in on the decision.

“I have been in this sport for 32 years now but never saw such an incident before. There was a better player than him. There were 12 judges who picked their best and he just got fewer votes.

There is win and loss in sport and one has to accept it, but he wasn’t able to hold his anger,” he told Dhaka Tribune. “I know him for a long time.

I liked him. He had a promising future, but he just ruined his career with this incident. I feel bad for him because I could never imagine he could act like this.”

It’s unfortunate to see the way this rising prospect’s bodybuilding ambitions ended. In the future, hopefully he can control his emotions in the heat of the moment.