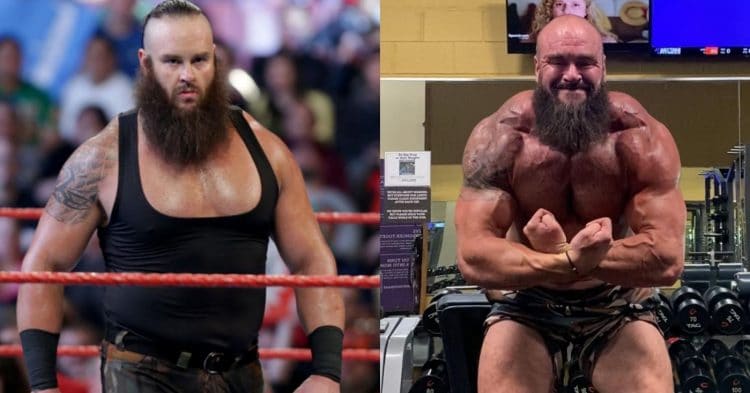 When it comes to his career inside the pro wrestling ring, Braun Strowman built up a reputation for his large, but somewhat rounded physique. Now he shows the product of the hard work he has been doing to improve his health, and the results are inspirational.

Strowman, also known by his given name Adam Scherr, is one of the biggest names in pro wrestling at the moment. This is a result of his many accolades, including being a WWE Intercontinental, WWE Universal, and RAW Tag Team champion.

However before he made that transition, Braun was also a decently accomplished strongman. In his time in the sport, he won the Central GA Strongest Man, Europa Battle of Champions, and Monster of the Midland events, as well as the Arnold Amateur Strongman Classic in 2012.

As is often the case with strongman athletes, Braun Strowman was a bit on the chubby side growing up. However the last several months have seen the pro wrestler undergo quite the physical transformation.

Taking to Instagram recently, Braun actually shared a physique update that showed just how insane the change he has gone through is. In addition to that, he also shared a message that can inspire fans to follow in his footsteps.

“If you told that insecure little chubby 10 year old I used to be that this what what I was gonna grow up into I would have said you were a liar!!!” Strowman wrote.

“So many times I was told I wasn’t good enough or smart enough and that I was gonna fail well here’s to all you doubters and bully’s I’ve met along the way. You can all kiss my giant jacked and tan ass!!!!! But thank you for the motivation. I will continue to prove people wrong. Bet against me I dare you cause I fight better from underneath!!!!!”

This is a stark contrast to the Braun Strowman who first made his debut in the WWE, or even the man who won strongman contests. He not only looks leaner, but he is absolutely shredded and has a physique that is closer akin to that of a bodybuilder.

A few months back, he shared a side-by-side comparison of his physique, and the difference is staggering. It is enough of a difference to inspire anyone to try following their fitness dreams.

There have been a lot of impressive physical transformations over the years, but this one from Braun Strowman is one of the better ones out there. He looks absolutely shredded, and it is incredible to see him looking so healthy and happy.

Father Time is undefeated, but there is one bodybuilder who's determined to change that. Japanese bodybuilder Toshisuke Kanazawa defied all...