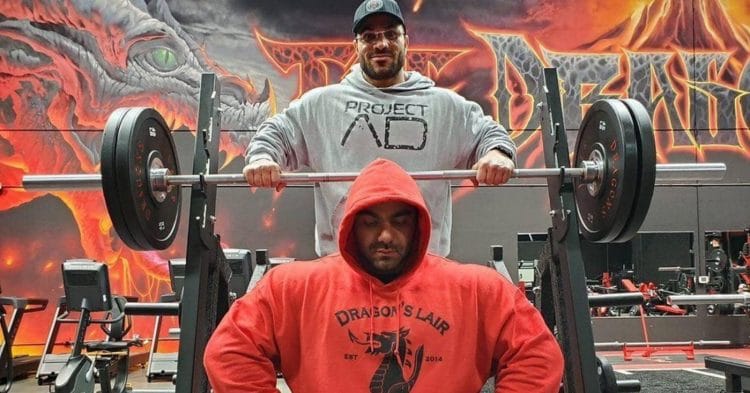 Flex Lewis’s new Dragon’s Lair gym has not even opened yet, but athletes are already flocking to the facility. Among these are Hassan Mostafa and Rafael Brandao, who shared a killer shoulder workout the day before the grand opening.

While still young in his career, Mostafa has begun to build a solid reputation for himself within the sport. The Egyptian bodybuilder has looked solid so far, coming in third at the 2019 Indy Pro, and fourth at the 2020 New York Pro, a show that he has hinted at possibly competing in again this year.

Juxtaposed to this, is the Brazilian Brandao, who has a bit more of a storied career, albeit one that is still unfolding. The 27-year old is a runner-up at the 2019 Arnold Classic South America, and also holds third place wins at both the European Pro and California Pro events.

These two prospects came together recently, as Rafael Brandao and Hassan Mostafa decided to join forces and hit the gym for a hardcore shoulder training session. The gym in question? Flex Lewis’s soon to be open Dragon’s Lair facility, just outside of Las Vegas, Nevada.

When it came to this training sesh, both men were all business with no talk. The experienced was documented and uploaded to the Jay Cutler TV YouTube channel, where fans can sees the pair get to work, as they both prepare to try earning a qualification for this year’s Olympia..

To start the day, Mostafa and Brandao traded turns on the shoulder press machine, with appeared to largely just be a warm up. After a few sets here, they then move to the dumbbells to do some lateral raises.

Next the men found themselves at the cable machine for some more lateral raises. Following that, they each had a round on the reverse fly machine, adding to the pump that their shoulders were getting.

The training session between Mostafa Hassan and Rafael Brandao ends with some pulldowns. Then, before the video concludes, a brief tour of the completed facility is shown, displaying the chill room with Shawn Ray on the TV, as well as an apparel store, and a really cool Dragon’s Lair light display.

These two were not the only people getting early access to this new gym. As the camera panned around, we saw the likes of Neil Hill and others, hitting the weights of this well equipped gym.

Rafael Brandao and Hassan Mostafa are both expected to attend the grand opening, which takes place on March 27th, along with a ton of other massive names in the sport. That said, they certainly made good use of the equipment today, with this solid shoulder routine.