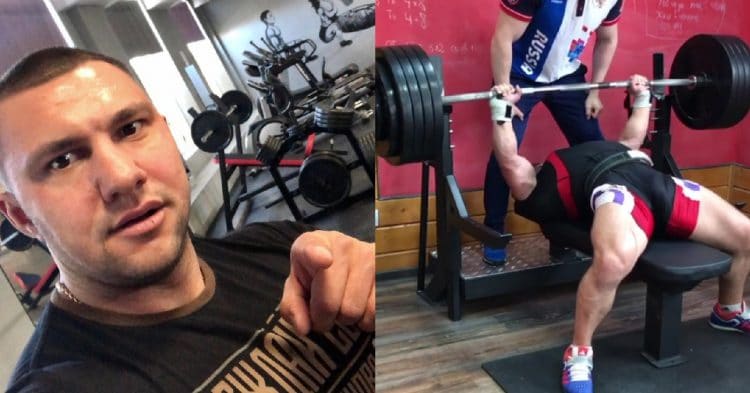 Andrey Sapozhonkov has already done more than enough to prove that he has some of the best strength in powerlifting. Nevertheless he reminded us recently that he can do some pretty otherworldly things in the gym.

As a world champion, and record setting powerlifter, Andrey has done a lot over his storied career throughout Russia. He has won several WRPF meets over the years, and has really established himself to being one of the best lifters on that side of the globe. Even in training, he never ceases to put together solid performances, showing that even at 35 years of age he is still growing and improving his overall game.

This work was evident recently, when Andrey Sapozhonkov took to his Instagram. Here he posted a video scoring a massive 595lb (270kg) bench press for a double. While this number is impressive on its own, the fact that it is three times his bodyweight makes it even more mind blowing.

As he explains in the post, Andrey has been working his way up in weight with his bench over the last few weeks. It has been a slow and steady progression, leading to this moment. Yet even still, he somehow looks better than he did hitting the 265kg bench a couple of days earlier.

Being able to bench press three times your own bodyweight is something that most people hope to achieve at some point in their life. However Andrey Sapozhonkov has managed to do so for reps, which is only dreamt of by most powerlifters. Nevertheless, he does it, and makes it look fairly easy. This is just one of the many reasons that this Russian lifter is one of the best in the world.