The 4x World's Strongest Man champion walks us through an important Strongman lift. 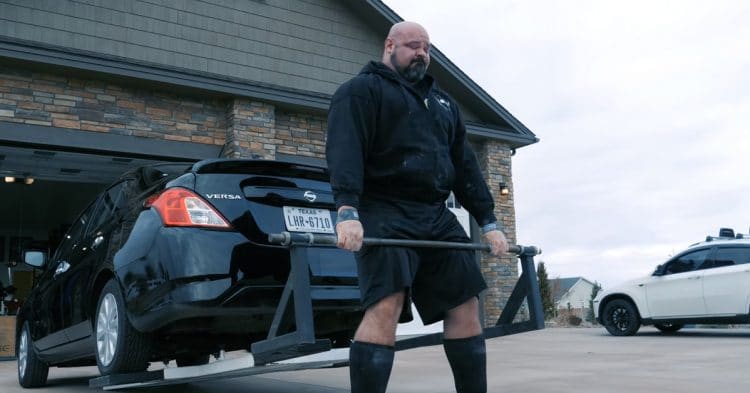 The car deadlift is a notable Strongman event that displays the freakish power of these elite strength athletes. Well, 4x World’s Strongest Man champion Brian Shaw definitely knows a thing or two about this lift/event. He has had to perform at a high level for many years during his career in order to reach the top.

So, there are honestly few people that could explain the process better than he can. In a recent video on his YouTube channel, Shaw wanted to do something fun for the viewers (although, he’s always doing fun stuff) but he also got in a little training at the same time.

But first, he had to fit himself into it and drive it back to his house before he could do that (not easy for a 6’8,” 415lb human but he did it).

Then he needed to find out how much the Nissan Versa weighed (the end he’d be lifting). And interestingly, he explained that a lot of promoters and athletes don’t actually weigh the cars for events so they assume it’s a certain weight. He says that is a big mistake.

Shaw then went ahead and weighed the car which came out to 680lbs which is actually the weight at the bar in the hand, so of course, it’s not the entire weight of the car. But that’s still pretty darn heavy.

So he used his new $500k home gym to prepare for the car deadlift by doing barbell deadlifts (worked up to 5 plates on each side) on an elevated surface to match the height of the bar that he’d be lifting the car with. Shaw says he’s always mixing up his training for Strongman…

“I try to throw a lot of curveballs at my body so I’m not getting accustomed to one setup, one bar height and only getting good at that“.

Next up… the car deadlift! Shaw looked super determined and he easily repped out 680 x 10 reps. But he wasn’t done quite yet. He added a 100lb plate in the trunk which he explained actually adds 50 pounds to his end, bringing the weight up to 730 lbs of which he did another 10 reps!

You can watch the lifts at around the 5:30 mark if you prefer to skip everything else…

Afterward, Shaw explained that he’s training the car deadlift to be prepared for this year’s World’s Strongest Man competition. Although, he’s not entirely sure it will be an event, however, it was at last year’s qualifier. So, it’s definitely better to be prepared just in case.

But he also just really loves this lift anyway…

“Honestly, I just love car deadlifts. I really like training it I think it’s a lot of fun, anytime you can pick up a car it’s pretty awesome.”

Overall though, he’s happy with his training so far and, of course, will have to modify his training leading up to the prestigious event.

Brian Shaw then finished off some other training and then he wrapped up with a few words about his current training.

“I can say that I took a step forward and got better. Everything is falling right in line with how I want it to at this point in the game leading up to the World’s Strongest Man“.

And as you probably guessed, the car was a rental which came in handy for his training session. But he ended by reassuring the fans/viewers that he’s going to come into the 2020 World’s Strongest very focused and possibly more ready than he has ever been for the massive competition.

Best TRX Back Exercises For a Thick Rock-Solid Back