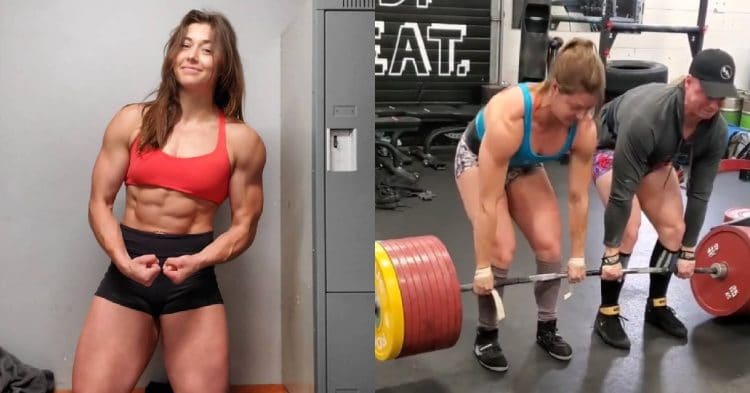 Jessica Buettner is no stranger to attempting some crazy lifts. However that backfired recently, when she attempted to do a tandem deadlift alongside Jarek Rhodes.

Buettner has been proving herself as one of the most elite among the incredible group of up and coming powerlifters. She holds wins in some pretty massive contests, including the CPU Nationals, her most recent meet. Here, she went 9/9 on her lifts, culminating in a strong 1240lb total.

Buettner refuses to stop there however, always looking to push herself towards a new goal. Most recently, she was seen trying her hand at a tandem deadlift, with the help of fellow powerlifter Jarek Rhode. Rhode does not have the most extensive record of accomplishments, but he has taken the stage at the CPU National Championships, scoring 12th place at 205lb.

Nevertheless, Buettner and Rhode decided to put their skills to the test, helping one another with a tandem deadlift. According to a post on Instagram, the pair were able to pull off an impressive 935lb lift together. Unfortunately, when they tried to bump it up to 1,003lb, things did not go so well. Despite two attempts, they could not get the weight off the ground.

“@jarekrhode and I did a 935lbs/425kg tandem deadlift – first time ever trying this!!! We also attempted 1003lbs (twice) but we definitely hit a wall
Yesterday was a crazy fun day 💪”

This appears to have taken place as part of the Rise CNS Deadlift Open. Even if Buettner and Rhode were successful in their tandem lift, it still would not have been enough to be the heaviest at the event. Instead, that honor goes to Aaron Osczevski and Anthony Singeris for hitting a whopping 1,113lb.

Regardless of whether or not Jessica Buettner and Jarek Rhode hit the second tandem lift is not the point. It was an insanely smooth lift on the first one, and the fact that Jessica was able to lift her end of the barbell shows which one of those two prefers the deadlift.