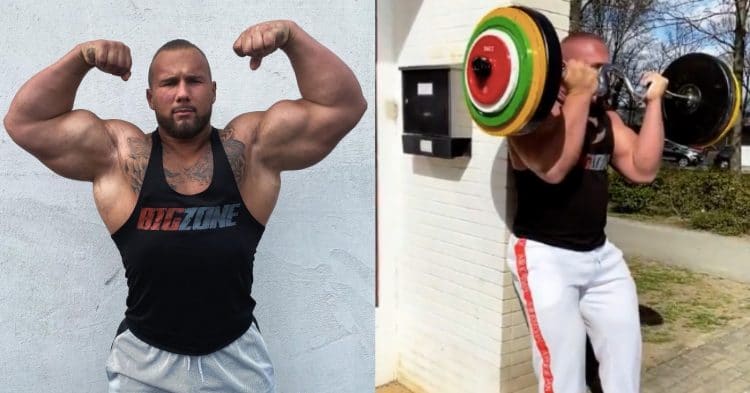 The strict curl is a lie that is arguably growing faster in popularity than anything else. Leonidas Arkona wants to own the world record for this lift, and he took a giant leap in the right direction recently.

At just 22 years of age, Arkona is something of a powerlifting phenom, with his sights set on this strict curl world record. This involves athletes curling an EZ bar, with their back, butt, and head remaining completely flush against a wall of some kind, with the current world record set at 113kg (249lb).

It appears that there is something of a race going on in powerlifting right now, for athletes to break this record. Larry Wheels was the main proponent of the lift, but it has since grown into popularity so much that it will be featured in its own invitational event at the upcoming 2021 Arnold Classic.

Leonidas Arkona wants to make sure that it is clear that he is to be considered a legitimate threat for this world record. He has been making several steps to achieve that goal too, further proving his place as one of the top you powerlifting prospects in the world today.

The most recent update on his progress came from a recent post to his Instagram. Here, the German can be seen hitting a strict curl of 105kg (231lb), which is just 7kg shy of the world record.

That was an absolutely ridiculous performance from Arkona, with it being clear that he has been grinding hard in training to boost those numbers. With such a relatively small amount between this showing and the record, not to mention how young he is, he has quickly become a legitimate contender for eventually shattering the world record.

Adding 7kg to the strict curl is no small task, but Leonidas is certainly up for it. He has been putting on some serious strength recently, as this performance came just two weeks after he landed a new personal record by strict curling 100kg for two reps, which almost makes this look easy.

We will have to wait and see if Leonidas Arkona participates in the strict curl event at the Arnold Classic this year. If he does make an appearance, it will be fascinating to see where his skills stack up against the other men who have their eyes on the throne.

If there is one thing we can learn from these recent glimpses at the German, it is that he will not go down without a fight. So whether it be later this year, or sometime in the near future, you can expect a world record attempt out of this young talent.