Despite initial doubts and speculation, Brian Shaw has confirmed that he is competing at the WSM, and also answers if he would ever box Eddie Hall 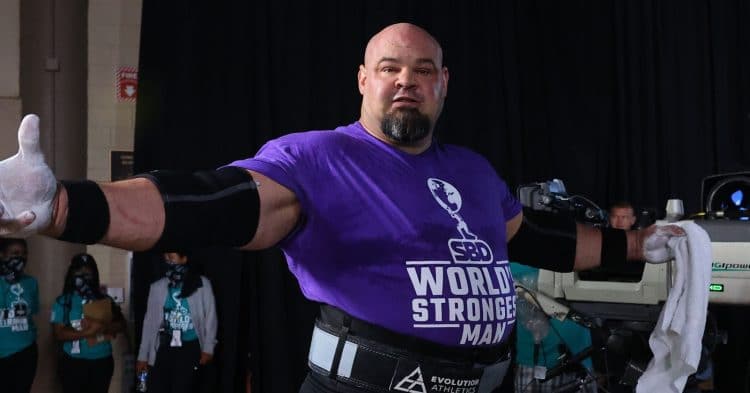 After coming in fifth place at the 2020 World’s Strongest Man, fans were wondering if Brian Shaw would compete again this year. Now he has put those concerns to bed, as he has confirmed that he will participating this year.

Heading into the WSM last year, the expectations were high that Shaw would be able to win the show. After all, he was the only previously WSM winner to compete in 2020, with Hafthor Bjornsson retiring earlier in the year, and Martins Licis being injured and unable to compete.

In the end, he would have what many would describe as an uncharacteristic performance, coming in fifth place. He certainly had moments of greatness, but overall did not look like the savage that fans were accustomed to.

Following this event, Brian Shaw left things open and uncertain about his future. He even suggested that he could be retiring after the way he looked, but did not completely commit to that decision.

Now it has been decided that not only will Brian continue competing (outside of his own Shaw Classic, of course), but he will be participating in the 2021 World’s Strongest Man. He broke the news with a video to YouTube, saying that he had just received his official invitation for the contest.

“I am happy to say that yes, I will be competing in this year’s World’s Strongest Man. I actually just got my official invitation in the email yesterday, so I replied back and I said yes I will be there,” Shaw said.

“Still waiting on details, but the contest will actually be held in Sacramento, California, June 15th-20th. So we are about 12 weeks out, give or take. It’s coming up quick, and I’ll be ready to go.”

That was a question that was posed to him in the same Q&A video, as Brian Shaw and Eddie Hall are close friends. Someone wanted to know if he would accept a potential callout from Eddie, if he were to be successful against Hafthor Bjornsson this September.

While he was jovial and lighthearted in his response, largely taking it as a joke, Brian made it clear that he was not necessarily opposed to this idea. Instead he jokes that Eddie would be too scared to box him, referencing an old video of Eddie running after throwing a medicine ball at Brian’s head.

“Let’s be honest, Eddie is honestly not that stupid to do that. I think you guys saw what happened when he hit me with the medicine ball, and how he ran away scared. So take that to another level with a boxing match. It would not be good for Eddie, so honestly I don’t see that happening,” Shaw said with a chuckle.

All joking aside, it is good to see that Brian Shaw will be competing at this year’s World Strongest Man. Considering he got the better of the WSM winner Oleksii Novikov a few weeks later, it will be interesting to see how he can do this time around.