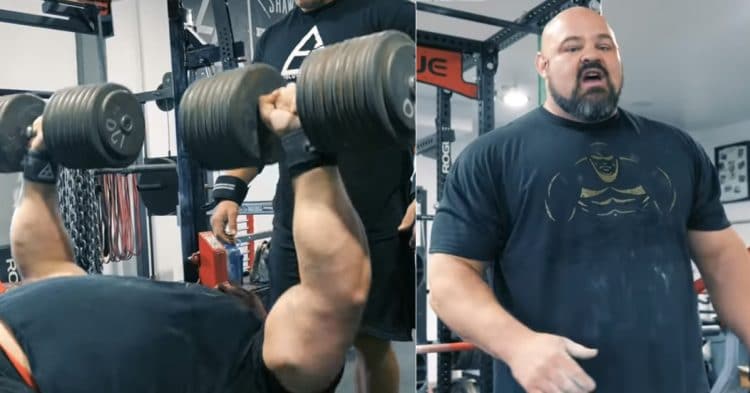 Strongman competitor Brian Shaw is bench pressing his way to success as he obliterated an AMRAP (as many reps as possible) PR in a new YouTube video.

Whilst many are stuck at home during the lockdown, Brian Shaw is providing great inspiration as he works towards a 701lb bench press. The four-time World’s Strongest Man winner has been sharing his training sessions on his YouTube channel.

The hefty challenge of 701lbs isn’t too far off the 350kg/770lb world record that was accomplished by Julius Maddox in March 2020, but Maddox is now aiming for 800lbs.

Eddie Hall tried to achieve a 700lb bench press in 2019, but was hindered by injuries and was never able to achieve his goal. Shaw trolled his fellow World’s Strongest Man winner by recreating his original “road to 700lbs” video at just one pound more.

The upcoming World’s Strongest Man competition has been pushed back from May to mid-November. Shaw is using the extra time to push on the gas and go full steam ahead in his training sessions.

To warm up, Shaw began with 135-pound bench presses reps, before bumping it up to 225 pounds, and then 315 pounds.

The 38-year-old moved on to a superset where he completed a set of the bench press followed by a two-second row using resistance bands from the bench. He completed 6 sets of 4 reps at a 425-pound bar weight. Shaw executed the superset flawlessly, making it almost impossible to differentiate from his 135-pound warm-up. Shaw proved he is making good progress toward his journey to 701lbs as he smashed his new bench press rep PR.

“This is actually a rep PR in a training session..I’ve never been able to do that ever,” he said. “So, I’ll take that as a big win today, and overall, my control with the bar and the bench. I’m still working on my setup a little bit, but it’s starting to feel more comfortable. So, very encouraged by that.”

Shaw rounded off his training session with a Juarez Valley pushup finisher. The workout entailed alternating reps of descending and ascending numbers. So the 38-year old accomplished 10 pushups, before moving position to complete 1 pushup. He continued with 9 reps before walking and alternating with 2 reps, eventually finishing in the middle with a set of 4 and 5 pushups.

“Wrapping up the training session here, those pushups were horrible,” said Shaw. The Juarez Valley finisher had pushed Shaw’s limits, but the strongman competitor was pleased with his progress.

“Overall today. I think went really awesome… I’m really happy with where we’re going, building up to this big bench. It’s been very challenging, humbling at times, but I’m excited to get this next block of training started.”

Watch Brian Shaw smash his rep PR in his “road to 701lbs” below.