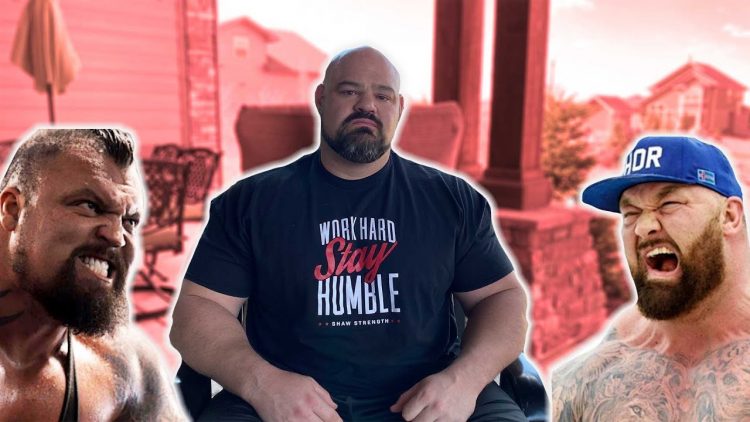 As Hafthor’s potentially historic deadlift world record attempt approaches, the controversy and drama around it gets bigger.  First, this was supposed to be a standard event at the WUS in Bahrain. Then everything went south, and the entire world is living in a prequel to a zombie apocalypse movie.  With the situation being what it is, Thor was kinda left between a rock and a hard place. He is fired up and ready to break Eddie’s record but he doesn’t have an official platform to perform it at. Thor then decided to do something quite unique and very controversial. He will be performing a world record attempt in his own gym with a small crew around him.

Recently, the very outspoken Eddie Hall spoke in a live Q&A about this and he even with the power of hindsight went to Instagram to clarify a bit and double down on his opinion. He just doesn’t see this as an official world record attempt. He sees this as a gym record, an unofficial record at best.

Now, the 4x WSM winner and one of the strongest guys on the planet and Hafthor’s rival has given his opinion on all this nonsense, drama and controversy.  Being the professional and the strongest nice guy ever, that he is-Brian tried his best to give an unbiased opinion.  Brian’s take is somewhat similar to what Eddie Hall is saying, it’s just no the same. There’s a big difference between attempting a world record in a sanctioned competition in front of a live crowd with other competitors allowed to test the record as well and pulling the weight in your own backyard.

According to Brian Shaw, the problem isn’t Thor not being able to hit the weight or trying to manipulate the circumstances to “cheat” his way into a world record. At this point, everyone knows Thor is gunning for the record and more than likely has it in him. The problem is that no matter how you spin this, Thor is attempting an “official” world record from inside his home gym and not in an official competition.

Brian made an interesting comparison with the NBA.  He was basically saying that if we follow this train of logic to its absolute extreme, you could decide the NBA finals winner in a similar fashion. What’s stopping the top 4 ranked teams to gather in someone’s backyard with a basketball court with a skeleton crew, stream the event and decide this season’s winner like that?

Bringing this subject to the world of Strongman, other Strongmen could also decide to test their record-breaking skills from the comforts of their homes. One week after Thor’s historic deadlift attempt, Luke Stoltman will be attempting the world record log press, also from the comfort of his home. According to WUS, this will be considered a world record, should Luke succeed, he would be recognized by WUS as a world record holder.

Without anyone being able to match the record on that day, without him having to wait for others to take their turns or for other events to end before the record attempt. I personally, agree with Brian Shaw because despite both guys probably having the records in them, it’s not the same. it’s good that guys are staying sharp and in shape but this should be considered an UNOFFICIAL world record or at least have an asterisk to the record or something. Which again, isn’t something Thor or Luke want, they want to get credit where credit is due.

Russel Orhii Cuts Through 716lb Deadlift Like It’s Nothing!