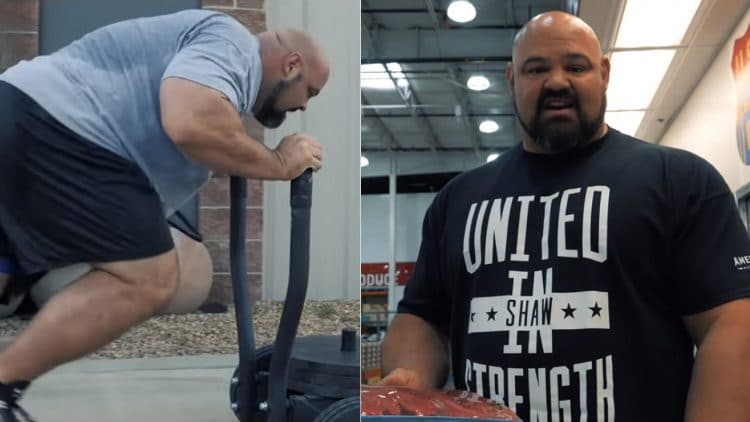 Shaw admitted to training more for pure strength but the WSM competition has adapted more endurance type events over the years. And so, now the four-time champion is aiming to lose 40 pounds.

Now, to start the video, Shaw weighed himself on the scale a fan sent him after his old one wasn’t working properly. And his starting weight before the weight loss journey is 434 lbs in clothing and with shoes on. So, his goal weight is… 400 lbs.

Check out the weigh-in and a shopping trip to Costco…

It’s apparent Shaw had a wake-up call after his disappointing 2019 WSM performance. But, he’s a real champion and is doing what needs to be done to be the best competitive version of himself possible.

But, hopefully, we’ll get to see Brain Shaw alongside the rest of the Strongman beasts at Giants Live Wembley on July 6th. It’ll be a big competition and if Shaw can get into a little bit better conditioning, we may see a better result at this showdown.

In the video, Shaw did some conditioning work alongside his normal training. So, he pushed a sled and did some kettlebell swings which “kicked his butt” as he explained. But, he knows this is going to be a tough journey and is committed to giving it his all, to reach his weight loss and performance goals.