Complete Results Of The 2020 IFBB Tampa Pro For All Divisions 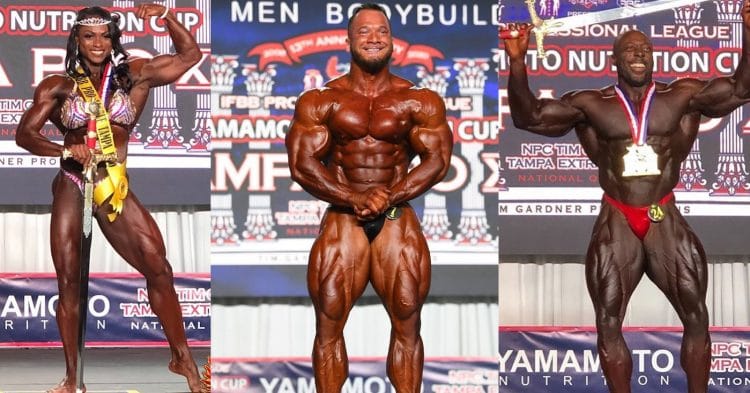 The thirteenth annual IFBB Tampa Pro took place this weekend, with athletes coming from around the world to compete. This is the full results from all of the divisions competing.

This year’s Tampa Pro is bigger than most. It marks the first major bodybuilding contest to take place since things were shut down due to the global health crisis. Although it did not go off without any hitches, it seems that for the most part all of the athletes competing were able to make it with no issue. Therefore over the course of three days, both male and female athletes took the stage, to show off their impeccable physique.

This is the results of the 2020 IFBB Tampa Pro:

Heading into the IFBB Tampa Pro, Hunter Labrada was considered to be a major favorite in the Open Division. However there were plenty of steep competition in his way. In the end, Hunter would win in what was an exciting display of bodybuilding.

The 212 Division always delivers some impressive physique, and the Tampa Pro was no different. There were a ton of exciting, up and coming talent on the roster this year. However George Peterson who recently switched from Classic Physique to 212 division would end leaving with the first place victory.

The Classic Physique Division is always a fan favorite, no matter what the competition is. The IFBB Tampa Pro was exception to this rule, as there was some serious excitement around this division. At the end of the day, Deontrai Campbell made a big enough of an impact to get the win.

As the IFBB Tampa Pro began, the Men’s Physique division had their winner decided early. This year saw Andre Ferguson bringing a solid, well rounded package to the stage. It was a close contest, with a steep roster of athletes, but he would end up getting the nod.

With the Ms. Olympia returning this year, the Women’s Open side of bodybuilding has been going through something of a renaissance. One athlete who set herself apart from her fellow bodybuilders was LaDawn McDay. She earned a stunning victory, establishing her place as a contender moving forward.

By far the most stacked female division at the IFBB Tampa Pro, the Bikini Division saw a ton of women bring their A-Game to the stage. While everybody looked stellar, only one would be able to rise to the top. This year, it would be Jennifer Dorie winning the event, with an outstanding showing.

Six different women took the stage at the IFBB Tampa Pro, to compete as a Fitness bodybuilder. While Ariel Khadr would wind up with the victory, it was a good showing from everyone. The rest of the standings went as follows:

One of the most popular divisions in all of female bodybuilding, the women competing in the Figure division are always well prepared. This event was no different, with stiff competition all the way through. It was a tough call, but eventually LaToyia Farley would be named the winner.

The Women’s Physique was another division that was super tough to determine a winner in. All these ladies looked impeccable, and gave it their all. Ultimately Ivie Rhein got the win, but it was by no means an easy decision to make.

Often flying under the radar, the Wellness Division is one of the trickiest in all of female bodybuilding. That did not stop Renee from bringing her full skills to the stage. This was not in vain either, as she managed to pull out the win.

All nine of the Masters Bikini competitors that took the stage at the IFBB Tampa Pro looked great. However Angela Ruscili was able to bring enough of a complete package to the stage to secure her victory. Of course, it was not without a fight.

The Masters division of the Figure competition saw twelve women 40 years or older, take the stage. Donya Jackson would be the one to get the win here. However all these ladies looked great, with solid physiques.

Sometimes Classic Physique Masters competitions can age like fine wine. This was seen this weekend, with Peter Sciallo⁣ beating the rest of his contemporaries. Although the division only had four competitors, he managed to stand out from the others.

Interestingly enough, there was a surprising amount of athletes competing in the Masters division of Men’s Physique. Fifteen men over the age of 40 put their skills to test, in a closely contested event. That being said, Michael Anderson managed to do enough in the eyes of the judges to get the win.

Like most Masters competition, there were not a lot of athletes competing in the Physique Masters division of the IFBB Tampa Pro. However all ten ladies who walked the stage, did so with the intent to win. With them all having great conditioning, Sherry Priami was deemed the winner this time around.

Congratulations to all the men and women who were victorious at the IFBB Tampa Pro.