Here are some superior options for healthy energy!

Caffeine pills contain one of the most effective and proven substances that we can possibly consume for energy, focus and performance benefits; which is well-documented in the various scientific literature.

But many products which contain caffeine promise to deliver all of the benefits and simply isn’t the case as not all are created equally. Hence the reason why we’ve put together a review of the top products currently available on the market.

So, check out our list of caffeine pills in addition to the important information which you need to know about this powerful ingredient…

Note: Make sure to read the product labels for recommended dosing instructions.

Don’t Have Much Time? Here’s the Editor’s Pick…

Here’s a top-notch supplement which contains only 5 calories per serving, 200mg caffeine, 100mg of the amino acid L-theanine, in addition to a more absorbable and fast-digesting partially man-made fat called medium-chain triglycerides (MCT’s) from coconuts.

L-theanine has been shown to reduce stress and it has a natural calming effect, and one study found that it has significant effects on mental alertness and arousal. (1, 2)

And another piece of scientific literature found that combining caffeine and l-theanine has a positive effect on cognitively demanding tasks. (3)

So, you really have a powerhouse of a supplement here. Plus, Smarter Vitamins caffeine + l-theanine has exactly what you want and nothing that you don’t. 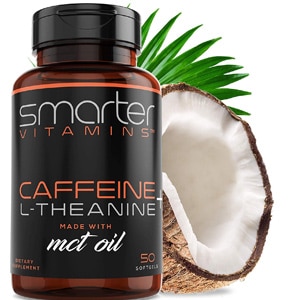 Caffeine is a nervous system stimulant that is found in many plants (e.g. coffee beans, tea leaves, cacao, etc). And although many products are derived from natural sources, many times, synthetic caffeine is added to supplements unless otherwise specified. (4)

And it works by blocking the function of the neurotransmitter adenosine that is responsible for calming the brain which results in tiredness. (5)

That’s why many people drink several cups of coffee in the morning to stay awake and alert.

Caffeine has obvious positive effects on the body and the main ones include nervous system stimulation (provides locomotor activity stimulation and anxiogenic-like effects) which gives you energy, plus focus, mental alertness, and even performance improvements during intense physical activity. (6)

It even has positive effects on the cardiovascular system with its inotropic and chronotropic effects.

One study found that caffeine has a protective effect on the risk of depression. (7)

And interestingly, another found that a few cups of coffee (caffeinated) per day is linked to a reduced risk of suicide. (8)

Caffeine also has positive effects on those with type 2 diabetes,  plus, there’s an association between caffeine consumption and reduced risk of stroke.  (9, 10)

And one study found a lower risk of coronary heart disease with moderate caffeine intake in men and women.

Now, for the potential weight loss effects, research shows that caffeine boosts metabolic rate and increases fat oxidation. And it also increases energy expenditure by 13% which is necessary for weight loss. (11, 12)

So, as you can see, the benefits of caffeine are quite apparent and the positive effects extend beyond what most people use it for. Although, the list could go on for its positive effects on health and performance.

Now, many people consume caffeine in the form of coffee and other products just for energy and enjoyment making it a habitual daily routine. But for those interested in performance whether it be lifting or sports activities, the pills we’ve reviewed are a great option that works similar to a pre-workout supplement (although, without as much caffeine).

But not everyone needs (or can) to consume a lot of caffeine. Sometimes, a little boost is just enough to get going without having to worry about the potential side effects which are different for everyone.

Plus, 200mg is a good mixture of effectiveness and minimal negative effects, and most of the products reviewed here today contain somewhere around this amount on average.

Check Out Our Other Top Picks…

Prolab caffeine tablets contain 200mg of caffeine and 75mg of calcium. This is a super simple energy tablet, plus there are no calories, glutens, milk, soy, artificial flavors, colors, added sugars or preservatives.

There are also a few additives used but this will not affect the effectiveness of the product if you don’t mind them.

Prolab Caffeine Tablets provide, focus, energy, and endurance without any jitters. It has 0 sugar and calories. 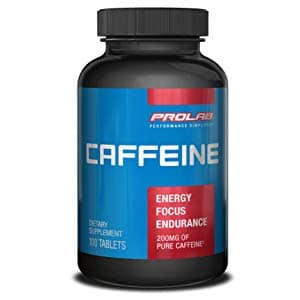 Nutricost is a reputable brand and therefore we’d have to expect a quality product with their caffeine pills.

There’s 200mg caffeine per serving and the other ingredients include rice flour and gelatin. So, it doesn’t get much simpler than that. But this is a top choice for a caffeine pill that will supply your body with energy to take on the tasks ahead.

Nutricost Caffeine Pills is a NON-GMO and Gluten-free product with 0 sugar and calories. A great alternative for coffee. 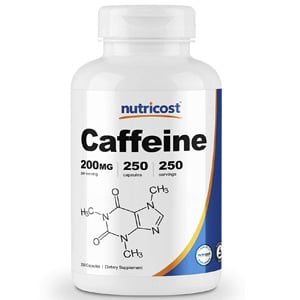 The trademarked VitaShure Caffeine SR contained in this product is microencapsulated which delivers the perfect amount of energy initially, followed by an extended-release of energy so that there’s no crash. There’s 100mg of caffeine per serving and only a few added ingredients which are healthy for consumption.

The product is also third-party tested for purity and peace of mind. 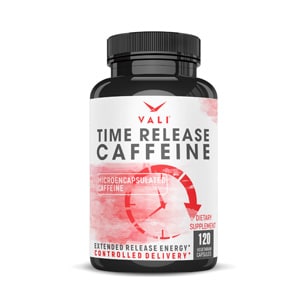 This is another great caffeine product from Smarter Vitamins but the only difference here is that it contains USDA organic certified Peruvian Maca root (250mg) in addition to the caffeine (250mg). But you still get the MCT oil (477mg) from coconuts.

Maca has shown positive effects as an adaptogen (stress support and hormone regulation), a nutraceutical, for preventing disease, sexual dysfunction, energy, and even osteoporosis (bone disease). (13)

And again, there are no junk ingredients in this formula. 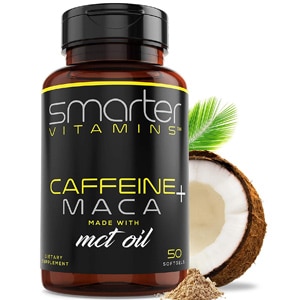 Each batch is third-party tested for purity too so you know that you’re getting what you’d expect. 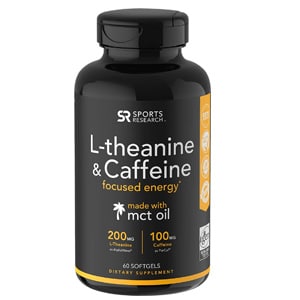 This is one of the top options on the market and it’s also an all-natural product that contains 167mg of sustained released trademark caffeine (NEWCAFF).

It’s hard to go wrong with this potent formula and the special caffeine contained. 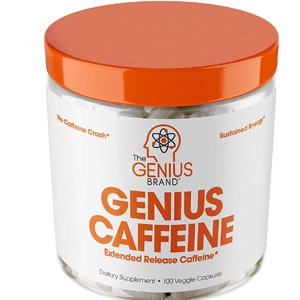 This formula by Elite contains only l-theanine (200mg) and caffeine (100mg) with nothing else except for rice flour and gelatin.

The company claims no jitters from this clean blend. 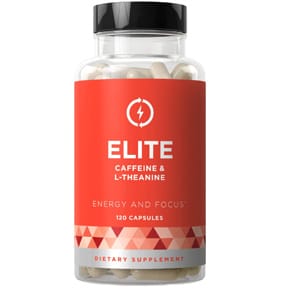 This a naturally-sourced and third-party tested formula which contains 200mg of l-theanine from green tea leaves, 150mg natural caffeine from coffee beans, and 25mg yerba mate.

It was even made with love (it’s on the bottle) for optimal quality and effectiveness. 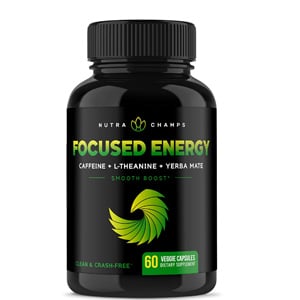 This is the perfect solution for on-the-go energy. There’s 200mg of energy-boosting caffeine and several additives as inactive ingredients. 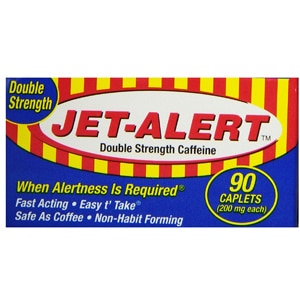 Here’s another great budget option that’ll push you past your mental limitations. Natrol caffeine tablets contain 200mg of caffeine and 75mg calcium per serving. But it does also contain several additives which won’t interfere with the effects of the potent boost of caffeine. 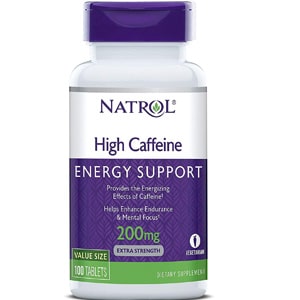 RevLabs Red Series caffeine capsules is a clean energy product which provides cognitive and physical benefits. A serving has 200mg l-theanine and 100mg caffeine. There are only a few inactive ingredients in the formula. 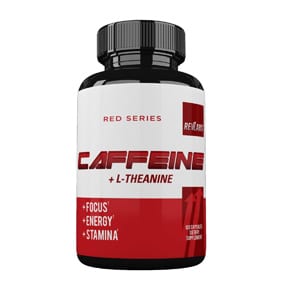 You’ll get 4-6 hours of sustainable energy with the combination of ingredients. 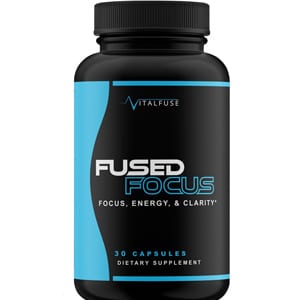 How Much Caffeine is Safe?

According to the Mayo Clinic, 400mg per day is recommended as the upper limit which is equivalent to about 3-4 cups of coffee (8 oz). (17)

But 40-200mg is a typical dose and it’s also very important that tolerance is built up before consuming anywhere near this amount because the side effects can be very harsh for someone not used to this powerful substance.

In fact, overuse of caffeine has been shown to result in intoxication which can cause premature death in the most severe cases. However, this could largely be due to underlying conditions. (18)

Therefore, if you do suffer from health conditions mostly related to the heart then you must be very careful of your caffeine consumption.

And what’s scary about caffeine where it relates to health concerns is that it’s not controlled or restricted.

So, there are many products which contain really high amounts of caffeine and anyone can purchase them.

How Much Caffeine Is Effective?

This really varies depending on the individual and the purpose. But research has found that anywhere from 100mg to 600mg is an effective dose. However, most people should not exceed the 400mg per day recommendation for safety. (19, 20)

But 300mg is a good dose for a combination of effectiveness and minimal side effects. And doses as little as 40mg per day can have an effect on cognitive function. (21)

How Quickly Does Caffeine Kick In and How Long Does It Last?

This definitely depends on the individual so some people will feel the effects faster than others. But, it’s not uncommon for caffeine to start working after 10-15 minutes.

But, it typically reaches peak levels in the blood within about 30-60 minutes, and it also has a half-life of 3-5 hours which is the time it takes your body to use half of the amount of caffeine. But, the remaining amount can stay in the body for a prolonged period. (22)

Any supplement can result in undesirable side effects but caffeine is one which is not to be taken lightly. It’s safe in most cases but people with sensitivities and a lack of tolerance as mentioned previously can cause issues.

Possible side effects include:

Caffeine does raise blood pressure slightly but this isn’t an issue in most cases.

Does Caffeine Cause Withdrawal?

Withdrawal tends to occur in individuals who consume caffeine habitually. But, this typically happens 12-24 hours after the last dose of caffeine. The most common side effect is a headache, although depression, anxiety, and fatigue are also typical symptoms.

However, withdrawal symptoms tend to resolve within 24-48 hours.

Who Should Not Use Caffeine Pills?

Anyone who has not built up a tolerance to the amount of caffeine contained in one serving of most products should not. But anyone with heart problems, anxiety, and trouble sleeping may want to steer clear of caffeine pills.

But anyone with health issues, in general, should consult with a doctor if considering taking a caffeine supplement.

If you drink a lot of caffeine regularly then there’s less of a risk of experiencing any side effects with a caffeine pill.

Caffeine pills work, plain and simple. It’s an effective option for supplying your body with physical/ mental energy and focus for hours. Plus, most of the top products won’t break the bank which is something to appreciate.

So, whether you need a boost before a workout or you just don’t feel like you can take on the day ahead, a caffeine pill supplement can get the job done.

But remember, you want to always choose quality as there are so many options to choose from and never take more than the recommended dose. And we hope that this list of top caffeine pill products will make the decision that much easier.