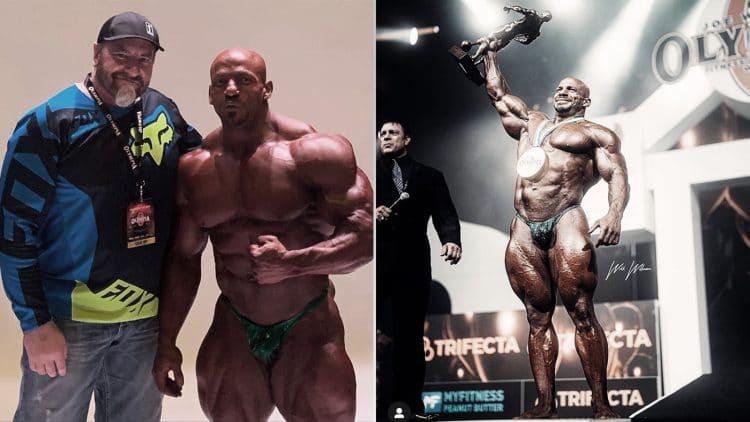 Renowned sports nutritionist Chad Nicholls recently spoke about Mamdouh ‘Big Ramy’ Elssbiay’s prospects heading into 2022 Olympia. Nicholls is one of the most respected names in the sports nutrition industry and is best known for his work with boxing legend Mike Tyson and eight-time Mr. Olympia winner Ronnie Coleman.

Chad Nicholls is presently working with the two-time and defending Mr. Olympia champion Big Ramy. A significant portion of the latter’s success can be attributed to Chad Nicholls. During his recent appearance on The Menace Podcast hosted by Dennis James, Nicholls spoke about a wide array of topics and also shared his thoughts on Big Ramy’s career going forward. Ramy won the Mr. Olympia title in 2020 and 2021. He is also a massive favorite heading into Mr. Olympia 2022.

Chad Nicholls is confident in Big Ramy’s ability to defend the Mr. Olympia title as he shared his opinion on Ramy’s place in the current roster.

However, Nicholls does believe that doing everything to maintain the lead is an obvious precondition for Big Ramy to maintain the current status quo in the open pro division.

“If something happens and he doesn’t do what he needs to do, then he opens the door for everybody to step in a little closer,” Nicholls further clarified.

In a recent off-season physique update, Big Ramy weighed 341lbs. The number raised a lot of eyebrows as some wondered if it would really benefit Ramy. Chad Nicholls stated that improving conditioning is still the game plan for Ramy at the 2022 Olympia. He further estimated that the reigning Olympia champion has the potential to benefit from a full year of training. Nicholls expects Big Ramy to show up in the 300-305lbs range in the competition.

“Our game plan is still conditioning. But at the same time, you take an entire year of training, which he probably hadn’t had for numerous years, getting a whole year dedicated to bodybuilding, pushing as hard as he can with everything timed perfect, there’s no telling what he’s capable of,” Chad Nicholls said.

“So, there’s no doubt that the potential to be three, you know. 300 to 305lbs, somewhere in that ballpark, in better shape than he’s been in the last two years,” Chad Nicholls revealed.

Olympia is set to return to its home in Las Vegas in 2022 after two years away due to the Covid-19 pandemic. The competition will take place from Dec. 16th to Dec. 18th in Las Vegas. Many up-and-comers are challenging the established names at the top. However, it does seem like Big Ramy might retain his top spot for a while.

Courtesy of the Muscle And Fitness YouTube channel, you can watch the full podcast episode here: