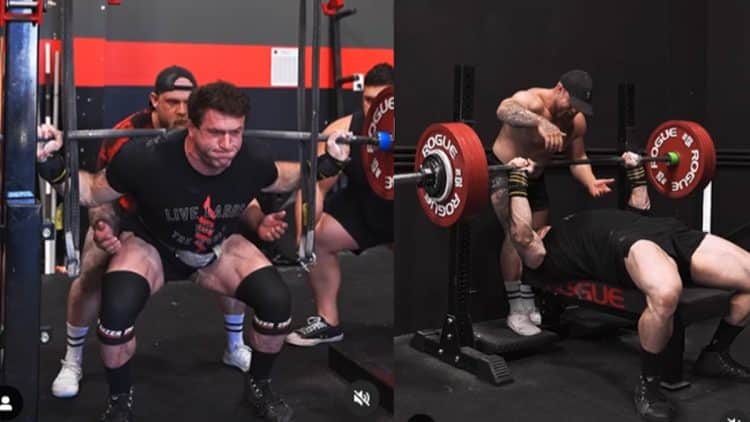 Having been one of the most promising powerlifters in the past decade, Chris Bridgeford has only competed three times since 2019. However, Chris is now brewing up a sensational comeback, which obviously excites many powerlifting fans. He will compete at the 2022 WRPF American Pro, which will take place on July 29-30, in Manassas, VA. Having lifted significantly heavier in training, Chris aims to improve on his competition PRs.

With the competition being only two weeks away, Chris Bridgeford has concluded his preparation with the final heavy training session. He definitely has reasons to be pleased with his preparation, since he has reached his peak shape just on time. It also resulted in new raw squat and bench press PRs.

Chris Bridgeford firstly squatted 755 pounds (342.5 kilograms), which is an incredible improvement. It is hard to say that Chris could have added more weight since he struggled quite a bit at one point. He also had seriously shredded legs, with his quads being the most eye-catching detail. This squat is 50 pounds heavier than Bridgeford’s competition PR.

Immediately following the squat, Bridgeford set a new personal best in the bench press. He managed to lift 523 pounds (237.2 kilograms) quite comfortably, which is also more than 20 pounds heavier than his competition PR.

“Words can’t really explain how scared l was to hit this last heavy single of prep today. Pressure is a privilege.”

“2149.5lb training total to cap off this last heavy week of training. The work will be done in 2 weeks.”

Chris Bridgeford began powerlifting professionally in 2014 when he was just 19 years old. Since then, he took part in 22 sanctioned competitions and won 11 of them.

Chris Bridgeford last competed in the 110-kilogram weight class, so he will probably do the same at the 2022 WRPF American Pro. Only Jamal Browner has managed to total 1,000 kilograms (2,204.6 pounds) in that division, but the way Chris is progressing, he could become the second one. Having returned to his love of powerlifting, Chris may pursue a World Record.

Best Pre-Workout Meal – What to Eat Before Training