The natty or not saga rages on... after Joe Rogan and Dr. Andrew Huberman rejected some of Liver King's beliefs, the famous primal went on the attack: 'that doesn't mean I have to take it laying down' 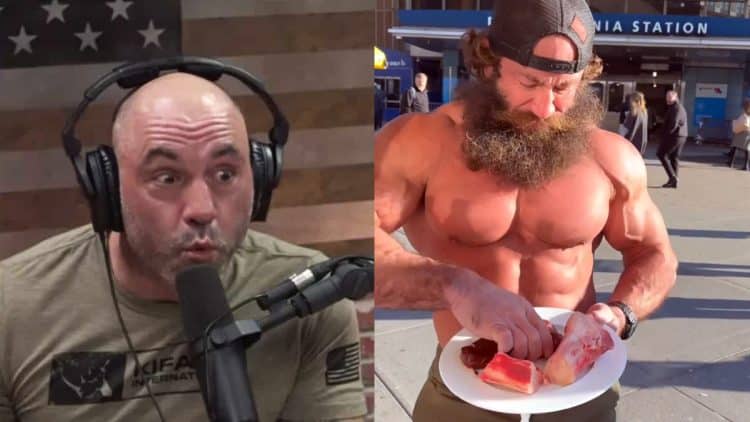 Brian Johnson, who now goes by Liver King, has never been more famous as a result of his shredded build and raw organ meat diet. In a reaction video, Liver King called out Joe Rogan after the podcast host said there is no way he’s natural.

Liver King is a 45-year-old man dedicated to living what he refers to as an ancestral lifestyle. He operates by the nine ancestral tenets, a set of principles designed to help people achieve their ‘highest and most dominant form.’ From ‘stacking sunlight’ for ten minutes a day, to eating, moving, or sleeping, Liver King insists that the more humans live like their ancestors, the healthier and happier they will become.

Johnson has joined a plethora of podcasts spreading his message of ancestral living worldwide. Due to his gnarly physique, many have accused the star of using steroids like Joe Rogan. Rogan says Liver King doesn’t have a natural body. The ‘CEO of the Ancestral Lifestyle’ responded, calling the allegations dangerous, and continued to express that he’s natural.

Rogan and Dr. Andrew Huberman recently held a podcast, where Liver King’s physique became the topic of discussion. According to Rogan, Liver King would have to be ‘ in the .000001 percent of the human population’ to have a physique like the one he has.

Huberman, an American neuroscientist, also disagreed with Liver King’s claim that eating raw organ meat results in those nutrients traveling to other parts of the body that need it most. He said there was no evidence to support that specific claim. Days after the podcast with Rogan and Huberman aired, Liver King gave his take on the situation.

‘Grateful’ Liver King to Joe Rogan: ‘Preach this Ancestral Message So Our People Don’t Have to Suffer’

In a recent Instagram video, Liver King addressed Rogan for the podcast comments and explained how everyone could benefit from learning the nine ancestral tenets.

“All I’m hearing is that Liver King is a freak of nature… and I couldn’t be more grateful to @joerogan !

Perhaps if we all stacked the sun and the earth… if we moved every day, twice a day… if we devoured nature’s most nutrient-dense superfoods… if we leaned into ALL 9 Ancestral Tenets… then high genetic expression would become mainstream.

The 99.99999% would represent the number of happy, healthy, and robust humans… instead of the number of people sleeping on their potential.

If you think Liver King is special, that’s okay. Just make sure you’re not looking for another excuse to be average.

You’re the only one who has to live with that choice, Primal.

P.S. The main bullet is that our people are suffering and struggling with modern-day conditions such as depression, anxiety, autoimmune, infertility, low energy, low libido and low ambition in life. Liver King is here to model teach and preach this Ancestral message so that it goes mainstream… so that our people no longer have to suffer… so that we can express our highest and most dominant form.

Case in point, even @joerogan once struggled with an autoimmune thyroid condition… the solution is he takes/eats the thyroid from a healthy animal. Let’s spread the message and do some goddam good in the world.

Liver King also had the following to say in the video:

“Liver King is doing his first ever reaction video to the Joe Rogan and Andrew Huberman podcast because Joe Rogan is talking about Liver King. And nobody, I mean NOBODY attacks Liver King with impunity… except maybe Joe Rogan but that doesn’t mean I have to take it laying down.” Liver King shared.

The social media star recently had powerlifter Mark Bell over to his headquarters. Bell also had his suspicions about Liver King’s natural status. However, after a thorough search of his homes, Bell said he was unable to ‘find a syringe, a SARM or any GH.‘

Despite the back and forth, Rogan has yet to budge on his opinion regarding Liver King. Rogan’s friend and former UFC heavyweight Brendan Schaub also took to his podcasting platform to discuss Johnson. Ultimately, he was left unsure as to whether the social media phenom uses steroids but said the 45-year-old is ‘triggering’ people because they aren’t able to live the same type of life.

RELATED: Liver King Talks Ab Implants on Full Send Podcast: “They Are Like $10K Each. I’m Rocking $100K Worth”

Grateful to be in the limelight, Liver King continues to promote ancestral living and raw meat eating. While he doesn’t agree with Rogan’s steroid accusations, Liver King is grateful for the help in spreading his message.