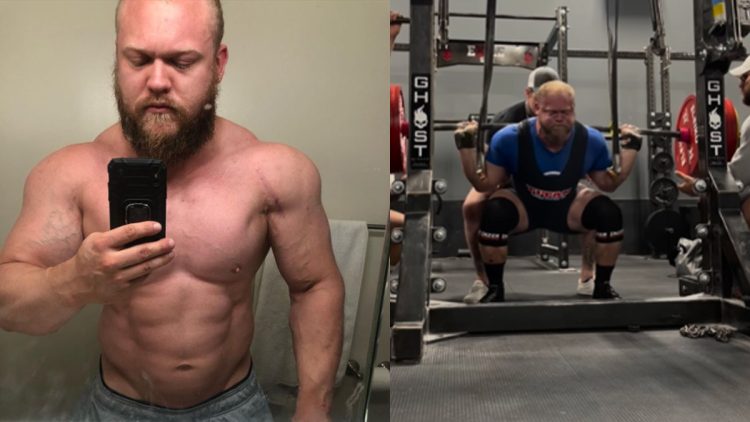 Just when it seems that he has reached the limits of what is humanly possible, Phillip Herndon goes out and unofficially breaks the All-Time World Record. Maybe “break” is too mild of a word for this feat of strength, as Herndon squatted 20 kilograms (44 pounds) over the current record. He managed to do this by performing a squat of 410 kilograms (903.9 pounds).

Seeing that Phillip Herndon shattered the record, it would be logical to think he did it with knee wraps, as that was his greatest prowess throughout the years. However, Herndon used knee sleeves, a lifting belt, and wrist wraps. So, his 410-kilogram (903.9-pound) squat was in fact raw by powerlifting regulations.

Kevin Oak set the current raw squat All-Time World Record of 390 kilograms (859.8 pounds) at the 2020 WRPF Hybrid Showdown II. This is the record for the 110-kilogram weight class in which Phillip has been competing for the past three years.

Phillip Herndon weighed 114 kilograms (252 pounds) at the time of his recent squat. Powerlifters, like professional fighters, cut weight just before a competition. Herndon will therefore be able to lose these extra 4 kilograms (8.8 pounds) without difficulty. Even if he remains the same bodyweight and competes in the 125-kilogram weight class, his 410-kilogram (903.9-pound) squat would tie Dennis Cornelius’ World Record in this division as well.

The opportunity will soon present itself for Phillip Herndon to break the World Record in an official competition. He intends to make an appearance at the 2022 WRPF American Pro, which will take place on July 29-30, in Manassas, VA. However, it is still not clear if Herndon will compete in the Wraps or Raw division. He recently also beat the Squat With Wraps World Record by 20 kilograms (44 pounds). So, Herndon will probably set a record either way.

Phillip Herndon has taken part in 35 sanctioned powerlifting competitions during his almost decade-long career. He was victorious 23 times and is currently on a nine consecutive win streak.

Phillip Herndon squatted 410 kilograms (903.9 pounds) with knee wraps in early May. Now, two months later, he has progressed enough to lift the same weight, but this time raw. This just shows that he will be bringing one of his greatest performances yet to the 2022 WRPF American Pro, so it will definitely be fascinating to watch.