Powerlifter Jamal Browner notches two new PRs in his recent training session to remind everyone how strong he is. 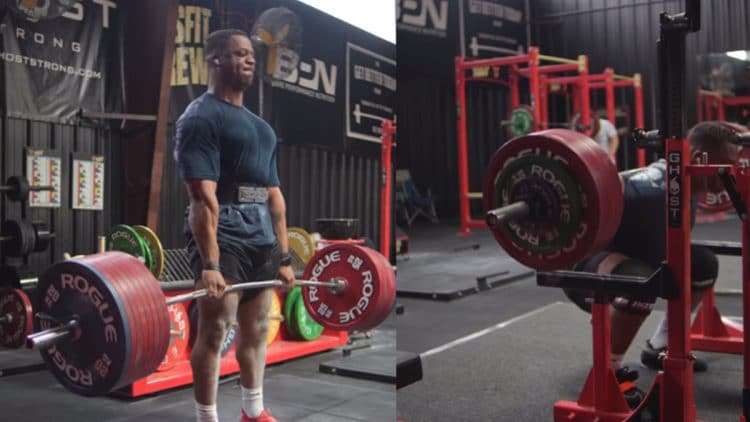 Jamal Browner is known for his gravity-defying sumo deadlifts, but he is not neglecting his conventional pulls. It seems like Jamal wants to become the first person to deadlift 1000 lbs with both stances, and claim one of the most incredible achievements in powerlifting. On April 19th, Jamal scored a new Two Rep Conventional Deadlift PR by pulling 903 lbs (410 kg). However, to make it more impressive, in the same training session, prior to the deadlifts, Jamal squatted 760.6 lbs (345 kg) for a new Three Rep PR.

Both of his new PRs are considered raw by powerlifting standards, as he used a lifting belt for the deadlift, and added knee sleeves for the squats.

Jamal has not specified his bodyweight at the time of the lift, but he usually competes in the 110 kg weight class. He has also not yet revealed when his next competition will be. Nonetheless, he is making some insane improvements in the gym, and is looking to improve all of his competition PRs.

Jamal Browner’s competitive powerlifting career has been going extremely well, as he has won 10 of 15 sanctioned competitions in which he took part. Jamal is also an All-Time Total & Deadlift World Record holder in the 110 kg weight class.

Just two days after hitting new squat and deadlift rep PRs, Jamal Browner is back in the gym pulling 959 lbs (435 kg) raw, but with a sumo stance this time. This deadlift is just 12 lbs (5.5 kg) lighter than the World Record and Jamal is able to pull it on his off days.

Recently Danny Grigsby and Krzysztof Wierzbicki took over the deadlift scene with some massive pull, but it is good to see that Jamal Browner has an ace in his sleeve. Judging by his recent training session, it’s just a matter of time before Jamal hits a (500 kg) pull, a lofty goal he wants to achieve for some time now. Jamal has already tried to pull 501 kg (1104.5 lbs) once but failed to succeed.