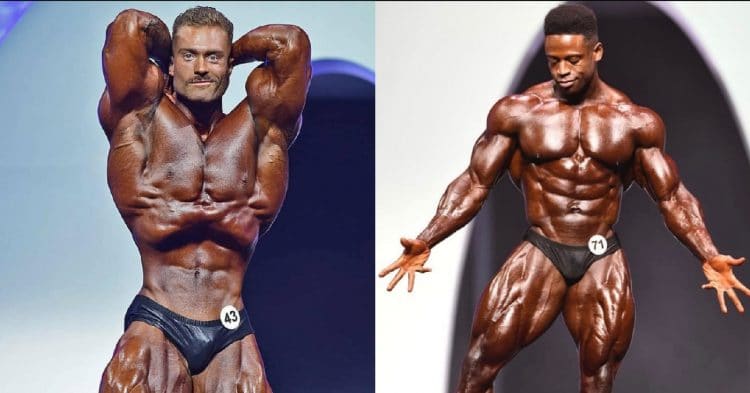 Heading into the 2020 Mr. Olympia, the rivalry between Chris Bumstead and Breon Ansley is one of the most intriguing storylines. Now the Classic Physique Olympia champ fires some shots at his rival, ahead of their showdown.

A lot of people felt that it was controversial when Bumstead won the 2019 Olympia, beating Ansley in the process. However Chris thinks that this is just a sign that the judging criteria for Classic Physique is shifting into a new direction, and that he was just the perfect person to begin ushering in this new era. On the other hand, Breon would fire back on numerous occasions, saying that Chris lacked some key parts of his physique and should not have won.

Chris Bumstead is not exactly bothered by this rivalry with Breon Ansley. In fact speaking in a recent interview, he explained that he thinks it is a good thing for the sport to have the two of them go back and forth. Not only that, but he fired his own shots at Breon, responding to some of the comments made by the former champ.

“Personally I love it,” Bumstead said. “I have a lot of fun with it. I think I enjoy it because I understand that if any pressure, any stress that I feel only ever comes from myself in all aspects of my life, my responsibility is fully in myself. So I don’t really feel any stress or pressure coming from other people, no matter what they say, and I am extremely grateful for that. I still feel pressure and all that stuff, but it’s usually from me, not anyone else. I’m not 100% sure everyone else is like that, so if I can have fun with it and it’s not going to effect me, it’s all part of the game.

“I think it’s good for sure, for the sport to have rivalries like this,” Chris Bumstead continued. “And Breon should be pissed. He thinks he a bodybuilder than me and he lost. I said last year at the press conference that the Olympia and IFBB were waiting for someone to show up with the perfect package of Classic Physique to send the division in that direction. That’s what I aimed to do in 2019, that what I continue to aim to do, and I think he should be pissed off. I think the division is heading in more of my direction, and he’s a much different physique than me, and he thinks he’s the best in the world. It’s going to create a little tension between us and a little rivalry and just be fun with it.”

Chris Bumstead goes on to compliment Breon Ansley for his skills and athleticism, making it clear that this rivalry is not personal and strictly competitive. Either way, they both seem motivated to bring their absolute best to the stage by December. Only then will it be determined whether Chris is right about the direction of the Classic Physique division.

How to Bring Up a Lagging Muscle Group