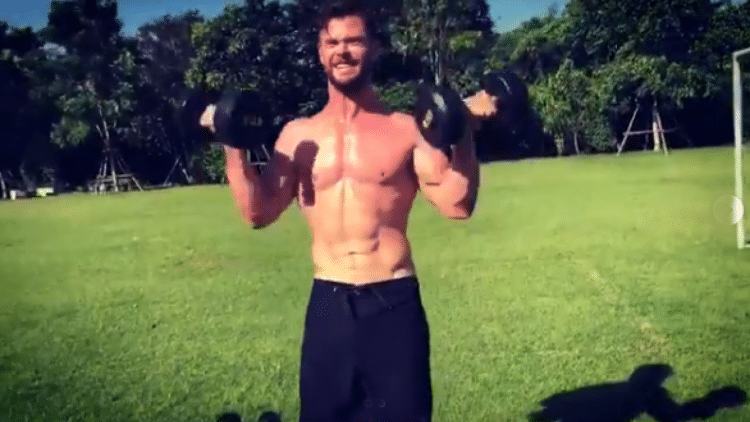 Chris Hemsworth is most known for being Thor, in the Marvel Cinematic Universe. However, he recently showed that he is nearly as physically capable as his fictional character.

Australia’s Hemsworth is one of Hollywood’s most popular actors. His first role on the big screen, was as George Kirk in the 2009 Star Trek film. Since then he has been in such movies as Snow White and The Huntsman, Men In Black: International, and 2016’s Ghostbusters. However, his role as Thor has blown his career up, and propelled him to a completely new level in his career.

That role of the “God of Thunder” comes with a certain need for preparation. While Hemsworth was already pretty fit, once he got that role, he took things to the next level. Now he is known for having an incredible physique, and being in unbelievable shape.

Furthermore, Chris Hemsworth demonstrated just how good his conditioning is, even still. He posted a video to his Instagram, where he showed off a new workout circuit he was doing. The set has four different workouts with dumbbells, as well as a sprint at the end.

“It was so hot my shirt literally burst into flames, luckily I was wearing my favourite pair of fire retardant shorts 🥵 give this circuit a go 6 times through”

While this workout has nothing on the CrossFit Open 20.2, this is still an intense circuit. It will provide well-balanced results for Hemsworth, with various types of exercises. He does short reps, with 50lb dumbbells to start, before ending with 35lb dumbbells, and a short sprint.

Nevertheless, Chris Hemsworth still manages to crush it like it is nothing, although he jokes about the heat. This is not a workout circuit designed for just anybody. As a result, it just goes to show how good of shape he stays in, even in between Marvel movies.