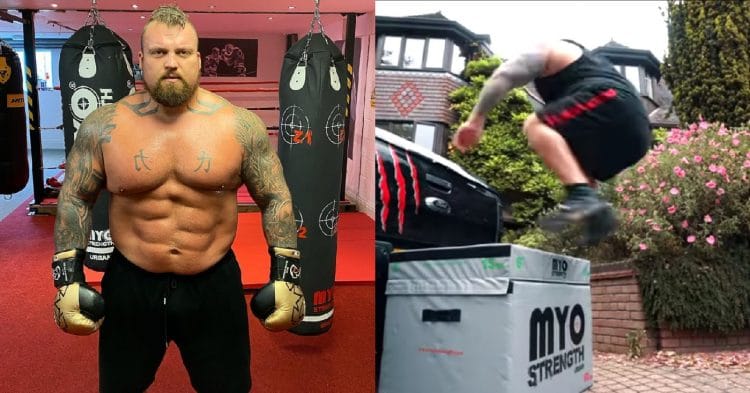 With his boxing match with Hafthor Bjornsson just over a year away, Eddie Hall has already been working super hard. A recent glimpse into his leg day routine sees him doing some even more intense training.

Altogether it has not been very long since Hall accepted the offer to fight Thor. Nevertheless both men have already shown some serious changes in their bodies, while dropping a ton of weight. Not to mention they have been working on their boxing techniques as well, with each man constantly sharing their progress.

However an important part of training, if Eddie Hall wishes to be successful in the ring, is leg day. Eddie has been doing a great job losing weight, which will help with his cardio. However in order to keep the explosive power behind his punches, as well as further extend his longevity during the fight, it is important to train legs.

So with that in mind, Hall took to his YouTube channel to display his intense 3 hour long leg training, and the first thing he did was warm up with some step ups. However he then transitioned to doing box jumps. It is not often that you see a 360lb strongman doing box jumps, so it was fascinating to see how he would do.

Starting off with a 24in box, Eddie manages to launch himself up for an easy six reps. Hearing the thud as he lands on the box is an easy reminder of how enormous of a man he is. From there, he adds an extra 12 inches, which ends up being slightly more of a challenge, nearly causing him to lose balance on the first rep. However he cranks out 6 reps at that height, before pushing himself to 42in, but that ends up being too high for the massive man.

After this, Hall moves on to some of the more traditional leg work that he usually does. He can be seen blowing through some Bulgarian Split Squats, as well as some explosive box squats. Although he does not much care much for the latter of these.

“Now, I’m not a fan of box squats but these are really good at doing a nice slow down, activating all those muscles and make sure everything is being recruited, little pause at the bottom, activate everything and explode up. So it really teaches your body to be explosive.”

All in all it seems that Eddie Hall is putting the pieces together to have a solid training camp for this boxing match. There is still a long way to go, but he is really taking this seriously.

Jumping exercises are one of the most effective ways to build lower body power. Power plays a vital part in...