Ciarra Cho is now putting her powerlifting career on pause and is shifting her focus on bodybuilding. 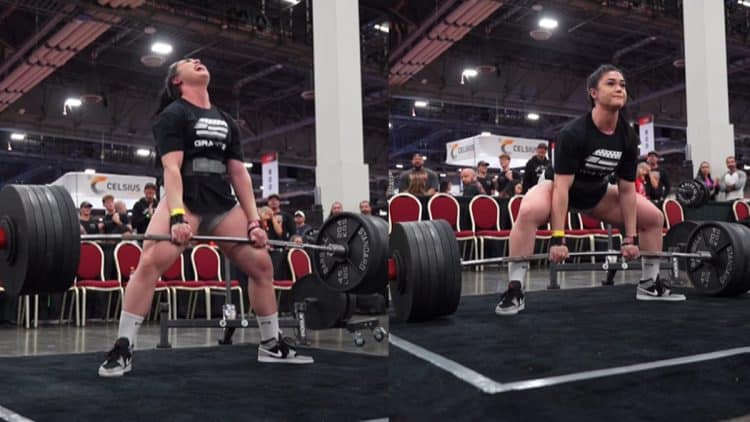 Professional bodybuilder and powerlifter Ciarra Cho previously known as Ciarra Hutton made a memorable appearance at the 2022 Olympia Expo, specifically at the booth of Stan Efferding, one of the strongest IFBB Pro bodybuilders in history. It was there that Ciarra achieved one of her biggest goals to date; deadlifting 600 pounds (272.2 kilograms) for the first time in her career. Cho used a lifting belt and lifting straps, while also utilizing a sumo stance to pull the impressive weight off the ground.

Ciarra Cho posted the video of her lift to her Instagram account, where she also reflected on the significance of this accomplishment. She explained that she set this goal for herself after earning her pro card in July „needing a goal outside of growing into“ her weight class. Although she did not predetermine a set date to achieve her goal, this deadlift was Cho’s final wish so she feels fully accomplished in powerlifting. Seeing that she has reached a point of satisfaction regarding her powerlifting career, for now, Cho is now moving on to different challenges.

With this 600-pound (272.2-kilogram) deadlift milestone now behind her, Ciarra Cho has set her sights on the biggest bodybuilding stage, as she hopes to compete at an Olympia competition in the upcoming few years.

Ciarra Cho has made a few bodybuilding appearances so far, but her most notable performance was at the 2022 NPC UNIVERSE, as she won her Wellness division and earned an IFBB Pro Card.

It is evident that Cho has always taken her bodybuilding career seriously, but she is now inspired to compete for the most coveted bodybuilding title in the world on the Olympia stage.

As for her powerlifting career, Ciarra Cho has taken part in 22 sanctioned competitions and won 16 of them. Those include two IPL World Championships, USPA North American Championships, and many more prestigious meets.

*Ciarra Cho set all of her competition PRs at the 2021 USPA Defying Gravity.

Ciarra previously went by the last name of Hutton, but she got married to an IFBB Pro, Jo Cho, and took his last name instead. They are helping each other build the best version of themselves because they both share the same ambitions. Therefore, Ciarra will have great support in one of her biggest challenges yet: qualifying for the Olympia.