Mackey is working his way ‘back up the ladder to the some heavy territory’ with his latest lift. 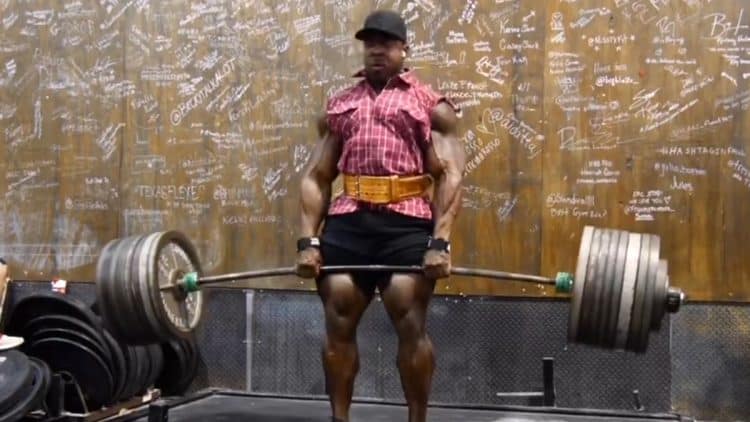 Bodybuilder Joe Mackey is one of the most exciting veterans in the sport, since he is a man of many talents. Besides his impressive physique, Mackey also gained popularity for his insane feats of strength. However, he is still getting stronger by day, since a recent post made on Instagram saw Mackey perform a huge 820-pound (371.9-kilogram) deadlift for two reps.

Having been a professional bodybuilder for more than a decade, Mackey made a name for himself as an IFBB Pro League standout. He boasts a deep chest and has massive arms that can rival the best competitors in the Men’s Open division. So, in 2021, Mackey participated in the 2021 Chicago Pro and got a 12th-place finish.

Mackey was determined to bring an improved package for his next show. He chose to be on the sidelines, working hard in the gym and sharing regular updates with his 117k followers on Instagram. Luckily, he managed to balance bodybuilding and strength training, which resulted in Mackey completing a gigantic 900-pound raw deadlift to set a new PR.

Joe dedicated the lift to the late bodybuilding legend Cedric McMillan, since he performed it shortly after Cedric passed away. He only used wrist wraps, and a customized lifting belt that had a motivational quote on it. Mackey likes to use the conventional stance and a hook grip.

Mackey is widely regarded as the strongest deadlifter in the pro-bodybuilding community. He proved his crazy strength again at C.T. Fletcher’s Iron Wars VI in May. Mackey kicked the show off with a huge 850-pound (385.5-kilogram) deadlift before doing 21 reps of 500 pounds (226.8 kilograms) after a brief pause.

In a recent video uploaded on his Instagram, Mackey achieved a new PR of a massive 820 pounds (371.9 kilograms) on the deadlift for two reps.

“820 lbs for 2 reps last night. Was great having my coach @jailhousestrong coaching me thru everything and @officialgasp the footage. Moving back up the ladder to the some heavy territory.”

Mackey has been very active this year as an Open competitor. He even recently made his way to train at the Dragon’s Lair Gym in Las Vegas, Nevada, which is owned by seven-time 212 Olympia winner, Flex Lewis. Joe was joined by his coach Milos Sarcev, who mentored him through posing.

Mackey looked incredible going into the 2022 Tampa Pro, which resulted in a fourth-place finish. He worked on his conditioning for the Texas Pro, which was a week later. However, rising prospect Andrew Jacked dominated this competition to win the show.

Joe Mackey is naturally vert strong, so he has no problem to improve his lifts quickly. After not deadlifting for months, Mackey got back to his best form in August when he crushed 725 pounds on the deadlift for three reps in a training session. If his latest update is any indication, Mackey has no intentions of slowing down as he continues to make some impressive strength gains.

The past weekend was extraordinarily busy for powerlifting athletes, as multiple state championships and meets took place. One of which...