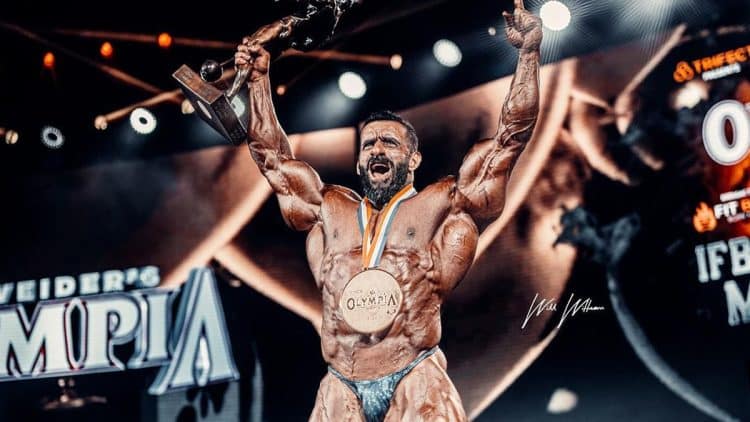 The 2022 Joe Weider’s Olympia Fitness & Performance Weekend, scheduled between Dec. 15-18 in Las Vegas, NV, hosted 11 divisions. However, the Mr. Olympia Men’s Open division is the most sought-after contest in the line-up. The Men’s Open bodybuilding roster consisted of 30 elite bodybuilders, each staking their claim at the elusive Sandow trophy.

While the reigning, defending, and two-time Mr. Olympia champ Mamdouh “Big Ramy” Elssbiay was considered the favorite heading into the show, things changed drastically at the pre-judging round on Dec. 16. It was Hadi Choopan who bagged his maiden Mr. Olympia title after a hard-fought battle.

After the first and final pre-judging callouts, it was clear that Hadi Choopan, Derek Lunsford, Brandon Curry, Nick Walker, Samson Dauda, and the reigning champ Big Ramy were the frontrunners for the coveted Mr. Olympia throne. Furthermore, the pre-judging round hinted that Big Ramy was not the judges’ first pick.

Hadi Choopan showed up with his trademark muscle conditioning, size, balance, and shape to wow the fans and judges. His wide back, tiny waist, and sweeping legs made him stand out from the competition. His conditioning was unparalleled.

Derek Lunsford too showed up with his signature conditioning and X-frame. He ended up taking a runner-up finish at his maiden Open division appearance.

Lunsford and Choopan appeared to have momentum behind them heading into the Mr. O finals after the pre-judging round as they enjoyed most time at the center of the stage during the callouts.

While Nick Walker brought a significantly improved physique to the 2022 Olympia, he had to settle for a third-place finish. “The Mutant” had placed fifth at the 2021 Olympia.

The two former Olympia champs Brandon Curry and Big Ramy fell to the fourth and fifth places, respectively. This tells you something about the quality of the competitors at the 2022 O.

While Krizo and Jacked were in the second callout, Blessing fell to the fourth callout in the confirmation round. Dauda was a different story altogether. His muscle size, balance, conditioning, and aesthetics got him into the first callout. Dauda is also arguably the best poser in the Men’s Open division. His posing skills remind us of veteran bodybuilding legends Kai Greene and Kevin Levrone.

Big Ramy and Walker were moved to the center of the stage towards the end of the final confirmation round, giving them a fair chance to show the judges what they had on their competition. However, it was Choopan who won the division’s highest honor. The Persian Wolf didn’t hold back his emotions and had tears in his eyes as he accepted the Olympia gold medal.

Choopan’s victory at the 2022 O makes him the 17th Mr. Olympia champion in the show’s 58-year history.