Nick Best is spending the entire weekend at the Expo meeting fans after showing off his deadlift prowess with a 15-rep set. 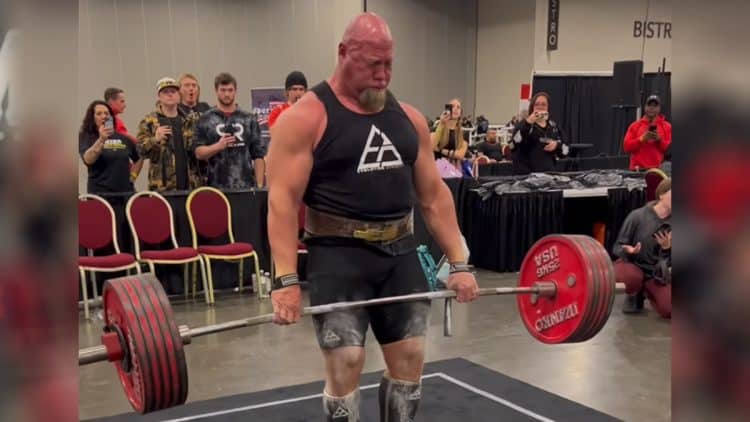 Nick Best, a 54-year-old former Strongman athlete, attended the 2022 Olympia Expo in Las Vegas on December 16th and wowed the audience with his impressive display of strength. He deadlifted 600 pounds (272.2 kilograms) for 15 reps, using lifting straps and a lifting belt to assist in his efforts. The Olympia Expo is a part of the premier bodybuilding competition of the year, attracting the best athletes and fitness enthusiasts from around the world. Nick’s feat was all the more impressive given his age, and he garnered a lot of attention and praise from the crowd.

By using lifting straps and a lifting belt, Nick was able to improve his performance and reduce the risk of injury. These tools are often used by strength athletes to help them lift more weight and achieve their goals. So, they proved useful to Nick in his 600-pound (272.2-kilogram) deadlift..

As Nick Best performed his deadlift set at the booth of legendary bodybuilder and powerlifter Stan Efferding, he no doubt inspired many of the attendees to pursue their own fitness goals. Efferding, being one of the strongest IFBB Pro’s in history, acknowledged Nick’s deadlift prowess and invited him to make an appearance at his booth. The 2022 Olympia Expo is a celebration of all things fitness, and seeing someone like Nick deadlift 600 pounds at the age of 54 is sure to motivate and inspire others to push themselves and reach for their own personal bests.

“It was great being a part of so many amazing performances today! Next week will be 700 for 3×3! Time to start pulling heavy again!”

Nick Best just recently announced that he will no longer be taking part in full Strongman competitions. He made the decision after finishing second in the Masters division of the 2022 Official Strongman Games, just behind Mark Felix. The time felt right for Nick, but judging by his most recent 600-pound (272.2-kilogram) 15-rep deadlift, he is still training as hard as ever.

Nick Best had a successful Strongman career spanning over 14 years. He is best known for competing in 10 World’s Strongest Man contests, with his best placing being 6th in 2010. In total, Nick competed in 36 international Strongman competitions and won three of them.

Strongman wasn’t the only strength sport that had a place in Nick Best’s heart, as he also dedicated a large portion of his life to powerlifting. Nick has tallied dozens of sanctioned appearances and victories in powerlifting, with his most recent one being the 2022 WRPF FQ Classic, where he set two World Records.

As Nick Best stated in the caption of his Instagram post, he will start deadlifting even heavier starting next week, since a 700-pound (317.5-kilogram) 3-rep deadlift is in his plans. So, it is likely that Nick still wants to set some more World Records in either powerlifting or single-event Strongman meets.