How To Do Cocoons Exercise Guide and Videos

Cocoons are a great abdominal exercise that you can do using your own bodyweight. As the name suggest, it mimics the protective covering of which insect life is formed. In this article, we'll explain how to do it, with tips, variations, and some information on how to include it in your training routine. 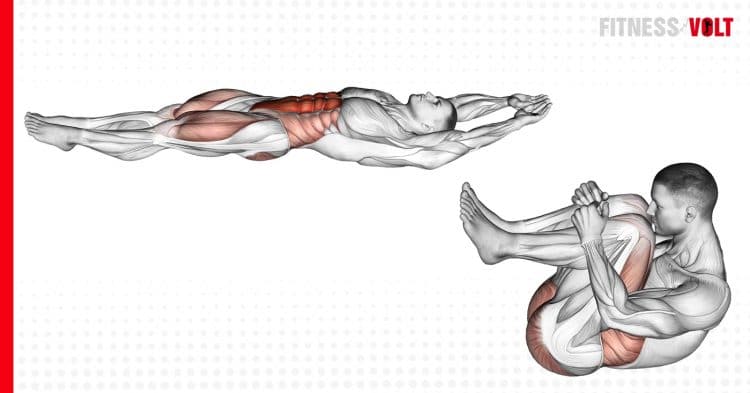 Cocoons might sound like a complex exercise but you can rest assured it’s as simple as can be. Easy? Well, that depends on your level of fitness and experience. But for most people in decent shape, they’re totally doable. The exercise, as the name suggests, mimics the protective covering that is formed by insects as they transition.

And it’s a fantastic exercise for engaging all of the core muscles while also involving the movement of the hips. But primarily, it’s going to help you develop those six-pack abs and improve core strength that’ll help you to perform better all-around.

In this article, we’ve explained how to do it, plus tips, variations, and advice for how to effectively include it in your training regime.

Here’s a guide to cocoons…

Cocoons revolve around the core and hip muscles. Learn how they function and where they are anatomically.

The iliopsoas is a clan of muscles including psoas major, psoas minor, and iliacus. It’s the primary flexor of the hip joint (e.g., pulling the legs in toward the chest during cocoons) and stabilizes the pelvis and lumbar spine individually. Anatomically, the iliopsoas starts from the vertebral column and hip and inserting on the femur.

Rectus abdominis is the external abdominal core muscles that often appear like two rows of individual square shaped muscles commonly referred to as a “six pack”. These muscles allow top and bottom of the torso to curl up toward the center of the body. They also help us to bend toward either side (flexion).

Cocoons are a good core strengthening exercise, however, it’s also good to improve your core development.

Related: The Best Six-Pack Abs Workout You Can Do At Home

How To Do Cocoons

Cocoons are rather straightforward and nothing too much different than what you probably already do for abs training. But here are step-by-step instructions to ensure you do them safely and effectively.

Cocoons are a pretty effective exercise for training the core muscles. But they’re definitely not the only variation that involves simultaneous movement of the lower and upper body. Here are three variations that we think you should also try.

You can do this exercise while holding a fixed barbell behind your head instead of just bodyweight only. But instead of bringing your arms forward over your legs, touch the bar to your hip crease as you bring the knees toward the chest.

V-ups are very similar to cocoons except the legs are kept straight rather than bent. So as you lift the legs up, you’ll also reach up to touch the toes.

The seated knee tuck exercise is also another great variation for working the entire core by incorporating the legs and upper body. To do it, sit up and place your arms by your sides then extend your legs while simultaneously leaning back as far as you can. You’ll then bring the knees and upper body together at the same time. keep tension on the core and don’t let your legs touch the ground.

How To Incorporate Cocoons Into Your Training Routine

Cocoons are a core exercise and therefore should be trained along with your other core movements.

But as far as the order in which you perform this exercise, we recommend doing your hanging leg raise or leg lift variations first because they are typically the most challenging. Then, you’d follow this up with an exercise that involves the lower and upper body such as the cocoon. After this, you can do a top-down exercise such as the basic crunch, then add a lying rotational exercise for obliques before standing up and doing a cable twist variation such as wood chops for the obliques.

Training this way allows you to maximize your efforts by doing the most challenging exercise first when you’re fresh and have the most energy.

We recommend doing at least 3 sets of cocoons to failure to maximize the engagement of the core muscles. You’ll know you’re done with your sets when you can no longer perform a rep using a full range of motion.

As for training frequency, once or twice per week as part of your core training workouts is plenty.

Cocoons are an exercise that you probably never heard of until now. That doesn’t mean they aren’t effective or useful though. You can rest assured that if you include these in your core routine, you’ll feel a burn like no other and you’ll begin to see the benefits if you’re consistent.

It’s a simple exercise but that doesn’t mean it’s easy, however, the more you challenge yourself, the better the results will be, as you’re probably aware. We hope this exercise guide was helpful for you in your ab training pursuits.

10 Lat Pulldown Alternative Exercises for A HUGE Back