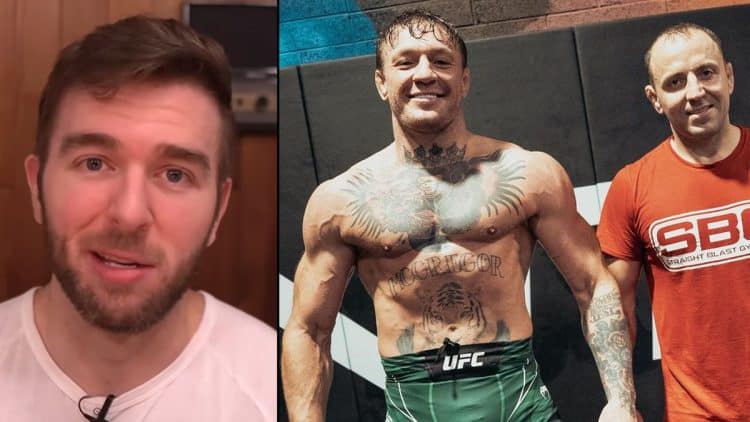 Former UFC two-division champion Conor McGregor is arguably the most popular mixed martial artist of all time. Fans are excited to see him step inside the octagon again after being on the sidelines for over a year and a half. In a YouTube video, Derek of More Plates More Dates shared his analysis of McGregor’s recent transformation, suggesting there’s a high chance McGregor used steroids or photoshop recently.

‘The Notorious’ first gained attention fighting in the English promotion Cage Warriors, where he won the featherweight and lightweight gold. In 2013, he made his way into the UFC as a massively hyped prospect and got off to a successful start with a first-round TKO finish of Marcus Brimage in his debut. He also scored the fastest knockout in a UFC title fight when he knocked out former champion Jose Aldo in 13 seconds, who was undefeated for a decade at the time.

Following his crowning moment in the UFC, McGregor’s celebrity skyrocketed to new heights. In Nov. 2016, He defeated former lightweight champion Eddie Alvarez in a phenomenal performance at UFC 205 to become the first fighter to hold two UFC titles simultaneously.

Conor McGregor accused of gear use or photoshop by PED expert

The Irish icon frequently gives updates to his 46.2 million fans on Instagram. In Dec. 2021, McGregor offered fans a sneak peek at his return preparations, where he looked absolutely jacked. The traditional 145-pound fighter stated he had bulked up to ‘190lbs of granite.’

In another recent update, McGregor described his swole physique as a combination of bodybuilding legend Arnold Schwarzenegger and martial arts sensation Bruce Lee. His insane physique transformation drew speculation about whether he was on the juice.

In a YouTube video by More Plates More Dates, Derek gave his breakdown of McGregor’s new look, comparing him to a young version of legendary bodybuilder Dorian Yates.

“He literally looks like Dorian Yates reincarnate from like years ago. Obviously not to the magnitude of muscularity but the face has a bit of resemblance to me. You’ll hardly recognize him like who the fook is that guy? This guy is looking much different in the past few months, especially with the fresh shave and these new photos he’s dropping of his absurd physique.”

Derek believes Conor McGregor has all the reasons to do steroids since he’s on the mend from a painful leg injury.

“He made multiple posts about it. This is the sauciest I’ve ever seen him look in my life, personally. He posted a shot of him weighing at 145, 155 and 170 pounds. Then he deleted the posts. Why exactly? I don’t know. But he didn’t delete the photo showing off his physique. These quads, and this photo is almost suspiciously photoshopped seemingly. That’s how cranked this guy looks right now relative to what I believe he’s naturally capable of.

“So either he’s almost certainly taking something right now while not being tested by USADA. There’s absolutely the most incentive ever for him, when he’s creeping into his mid-30s, has to make a dramatic comeback, this is his last shot to do it essentially. He’s coming off a brutal injury where you would probably be taking certain things in order to expedite your recovery and make sure you come back with enhanced infrastructure to support avoiding injury in the future and getting yourself battle-ready again.”

Derek More Plates More Dates: ‘he could be an IFBB Pro’

Derek believes Conor McGregor might be photoshopping his physique or using performance-enhancing drugs.

“Are there extreme circumstances in which he’d be exempt? He can just show up sauced to the gills, like what is going on here with this guy? Everyone is wondering why this guy hasn’t been drug tested. People talk about his injury, getting out of the pool, etc. But he has impending plans to come back to the UFC and make a statement. This does not look representative of just ‘I took time off and I’m focusing on building my physique back to be fight ready.’ He has never resembled this in this dramatic of a fashion.

“This is almost to the point where I would think the picture is fake. That’s how juicy this guy looks. Even in the past, though, it’s not like there was certainty around if he’s used hormones or anything.

“But when you’re not even passing the eye test, the smell test, where you just look at a guy and it’s like damn, the dramatic before and after difference where you’re a well trained individual who’s been in the gym for years, maybe not trying to gain copious amounts of weight, but the lean mass he has packed on in this picture, the quad sweep, like this guy might as well become a f**king IFBB Pro dude.

“Not really but this is impressive, especially with his f**ked up leg. To look like this, these are impressive quads to the point where they’re suspect as hell and potentially even photoshopped. I don’t know for sure. But it’s either one of two things: either sauce or photoshop.”

If @schwarzenegger and @brucelee had a mad Irish baby 😂😂☘️

After careful consideration, Derek added that photoshop seemed more likely than steroids given the evidence provided.

“A really wild before and after, a more realistic shot. To go from that to this, t hat’s like 20 to 30 pounds of actual muscle accrued, which is just not going to happen naturally, in my opinion.”

“I don’t think it’s representative of his actual physique even if he is on gear. These are newbie hyper responder type steroid gains if he was to actually be looking like that right now.”

Conor McGregor suffered a horrific leg break injury in his last outing against fan favorite Dustin Poirier in Jul. 2021 at UFC 264. He needed surgery for the broken tibia and has been in recovery since. As the highest-selling superstar in the sport, there’s a lot of anticipation for his comeback.