The Swedish acting legend turned back the clock with an impressive physique update at 65. 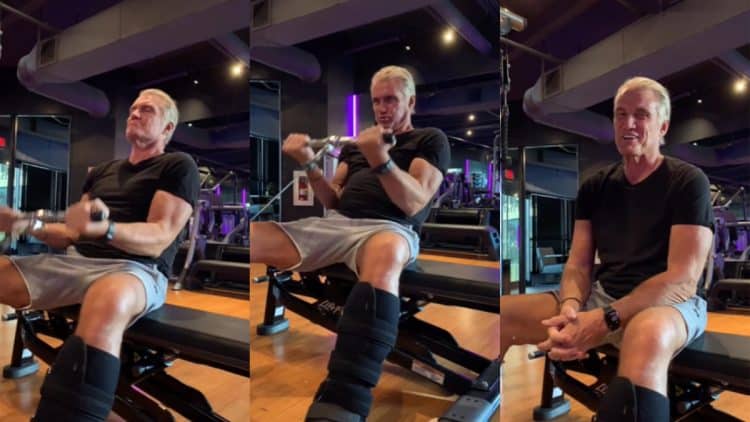 Hollywood star and filmmaker Hanz Lundgren better known as Dolph Lundgren achieved the American dream en route to acting in over 80 projects. In a recent post on Instagram, Lundgren took a break from acting to share a jacked physique update at 65.

Having dominated in the action genre for most of his life, Lundgren’s popularity swelled after playing the stoic Soviet boxer Ivan Drago in Rocky IV as part of Sylvester Stallone’s popular series. While he’s long stepped out of the boxing ring, Lundgren’s love for fitness and staying in shape continue to drive his ambitions.

Despite getting older, he’s taken on strenuous roles in the Expendables and participated in the superhero TV show Arrow. In 2019, fans got to see some of their favorite action heroes together when Lundgren and the seven-time Mr. Olympia Arnold Schwarzenegger horsed around at the Terminator: Dark Fate event.

As with many celebrities, Dolph’s dedication to staying fit was front and center during the Coronavirus pandemic. There were numerous gym closures but Lundgren never stopped working out. To stay mentally sharp and physically fit, Lundgren shared some of the at-home workouts he used to build muscle during these trying times. In one of his latest Instagram posts, Lundgren showed off his age-defying build once again.

The decorated actor was spotted performing seated cable curls and doesn’t appear to be slowing down in the slightest at 65.

“Happy Thanksgiving everyone! Enjoy the desserts – I know I will

The last time Dolph was in the headlines was with Schwarzenegger. He joined the bodybuilding legend at a children’s charity event. To attend the gathering, guests like Dolph Lundgren, Sylvester Stallone, and Danny DeVito all paid $50,000 each for entry. Schwarzenegger also offered special $150,000 training sessions for a select few during the public appearance.

Meanwhile, Sylvester Stallone is another friend of Lundgren’s who has yet to take his foot off the gas. At 76, Stallone’s contributions to Hollywood continue to pile up. Stallone turned heads in August with an impressive physique update and fans were quick to point out his huge arms.

Lundgren isn’t the only action-hero legend committed to fitness. At 75 years old, Schwarzenegger still pushes himself inside the gym but admitted one of his biggest challenges was changing the public’s opinion of bodybuilding. In the past, Schwarzenegger has brought up bodybuilding’s reputation, and even mentioned action stars who refused to acknowledge the sport due to its poor optics.

Dolph Lundgren’s longevity is lauded at 65 and staying disciplined around the holidays is never easy. Despite countless acting projects, Lundgren makes time for working out and prioritizes his health.

All 212 Olympia Winners Since 2008 (and History of the Division)