UFC star Conor McGregor appears to be packing on the muscle lately. 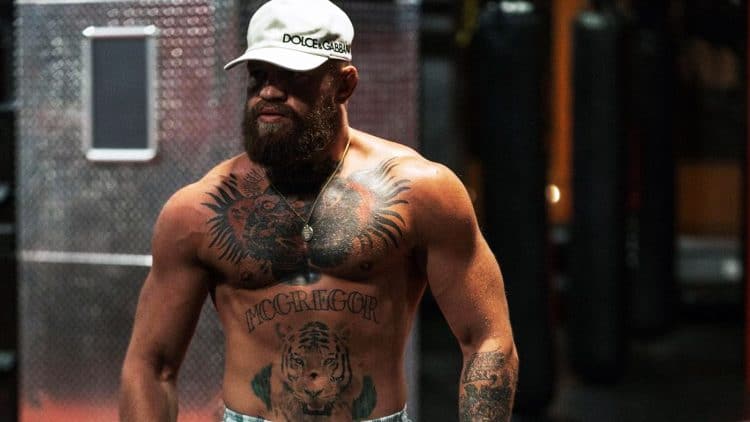 Conor McGregor continues the healing process after a freak injury resulted in his tibia/fibula breaking during his trilogy fight with Dustin Poirier. In a recent photo shared on Instagram, the former two-division UFC champion appears to be bulked up with a whole lot of muscle packed on.

As one of the most well-known athletes on the planet, McGregor has amassed countless fans along with countless dollars. The Irish superstar has endured some hurdles in the UFC as of late. After losing the rubber match to Dustin Poirier earlier this year, the Irishman has mostly been on the mend. While McGregor suffered an injured leg, he’s making gains in the weight room judging by his new pumped-up build.

Conor McGregor has always had incredible definition to his muscles and a physique few are able to carve out. Recently, after losing back-to-back MMA fights, McGregor took to the gym to bulk up.

“Been hit with a few shells but I don’t walk with a limp. @tidlsport” Conor McGregor shared on Friday.

Conor McGregor is 190-pounds in the photo above.  “The Notorious” is built, especially now that he seems to be taking his strength and conditioning regimen seriously. On a side note, he’s been unable to exercise regularly with cardio, so the superstar has remained healthy by lifting weights.

The trapezius muscle, the most overlooked muscle in all of fighting.
Sign up to @McGregorFast for my trap explosion program. pic.twitter.com/GgdcNOnnT3

From the looks of the superstar’s Instagram, it appears he’s lifting weights intermittently. The Irishman has been seen curling heavy dumbbells’ with stellar form from time to time. While McGregor has no fight lined up, gaining muscle in the gym is a great way to stay healthy and active.

McGregor is a consummate professional and always focuses on any avenue that can bring him success in athletic competitions. With his recent fascination for powerlifting, perhaps the world might soon witness a Conor McGregor even more bulked up than he is now.

Conor McGregor‘s protein choices mostly comprise chicken, salmon, and shrimp. Additionally, the fighter utilizes a vast array of vegetables and fruit throughout the course of his day. Potatoes and eggs are also integral to McGregor getting the vital nutrients needed for 2-3 HIT sessions a day to prepare for a UFC fight. A comprehensive view of McGregor’s diet and exercise details can be found here. Either way, Conor McGregor is making gains in the training room by eating right and bulking up.

Forearm Weights — Benefits, Types, and How To Use Them

The twenty-first century is an exciting time for the health and fitness industry. We see new training techniques, programs, supplements,...