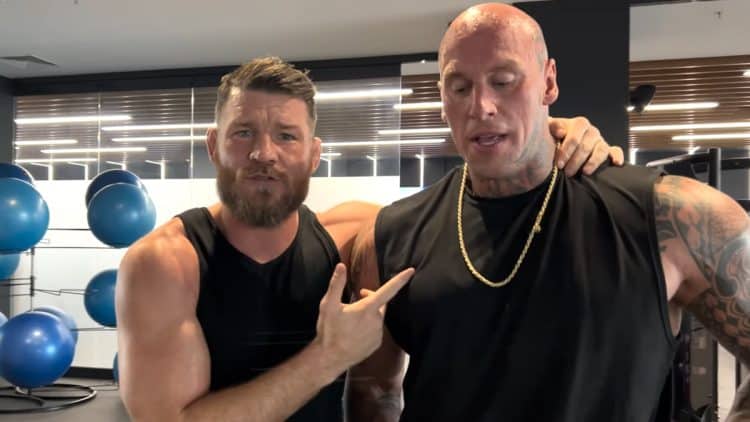 ‘World’s Scariest Man’ Martyn Ford is a bodybuilder, trainer, actor, and model from the United Kingdom. The six-foot-eight 300-pound Brit is known for his intimidating appearance that has earned him the monikers ‘The Nightmare’ and ‘World’s Scariest Man’. Ford became a combat sports sensation when he transitioned to boxing for a celebrity fight against Sajad Gharibi, also known as The Iranian Hulk. Ford’s physical transformation and training videos for this fight earned him widespread praise among combat sports experts. However, the fight failed to materialize after a series of dramatic events.

Ford was recently joined by MMA legend and former UFC Middleweight Michael Bisping for a chest workout. Bisping is the first British champion in the promotion’s history. Following his retirement from the sport in 2018, the 43-year-old  joined the UFC’s broadcast team. Having competed as a prizefighter, Bisping has dealt with innumerable injuries over the last two decades. He joined Ford to learn about weight training and implement it in his training routine. The duo went through the training session as ‘The Count’ followed in Ford’s footsteps.

The video of this session was uploaded on Michael Bisping’s YouTube channel on Sept. 3, 2022.

Ford called this particular training session a ‘giant set’. While explaining the meaning of this term, he said:

“A giant set is when you combine more than two exercises together… You can do the same muscle parts, different muscle parts… it’s basically just a fancy word for circuit training.”

Basically, a giant set is a circuit of three or more exercises without resting in between.

Bisping was amazed to know that despite being a 280-pound individual, Ford does not go super heavy and instead trains with relatively moderate weights. Ford explained his training methods and said:

“The main thing about training is that it has to be personalized. For me, there are different stages of my training where I’ll train differently. So it’s called periodization training.”

Ford added that since he is currently on a filming schedule, staying injury-free while maintaining his muscle mass is the goal. In addition to professional commitments, disturbed eating habits, sleep schedule, and dehydration are also contributing factors that could lead to injuries if Ford decided to do heavy workouts.

“Keep the weights smaller, focus more on the repetition and range of motion and make the body work with minimum risk of potential injury. The bigger the weight, the more you’re going to get injured,” Ford concluded.

Being more familiar with this training method and the concept of a giant set, Ford led the workout as Bisping followed suit. The former UFC champion admitted that the conversation with Ford completely changed his perception of ‘The World’s Scariest Man’ and said:

“When you look at Martyn — with all due respect — people might think he is a meathead. But he is already teaching me a lot of things I didn’t know about recovery, about using the body properly.”

Ford started the training session with the pec deck fly as the warm-up exercise. Bisping admitted that working with moderate weights allows him to train with Ford as the latter is a bigger guy, and matching his strength would otherwise not be possible for the 43-year-old.

After doing a few warm-up sets, Ford jumped into the working sets. As mentioned before, Ford focuses on technique and body mechanics when working with moderate weights. According to him, each rep should ideally take six seconds as it allows to properly stretch the muscle and flush it with blood.

Ford took to the machine chest press on a selectorized machine. In the first set, he pulled the entire weight stack with the goal to hit failure at around 10 to 12 reps. The goal for the second set was to fail at five to six reps after reducing the weight by 10 to 15 percent.

“Always focus on the form. There’s no point pushing the movement when you start bringing other muscles into it,” Ford said.

Before starting the third and final exercise, Bisping pointed out Ford’s reliance on machines rather than free weights. Ford explained that training on machines provides him better stability as past injuries and surgery had compromised his posture and stability. Training with machines reduces the chances of training-related injuries as the weights move along a fixed trajectory; therefore, control is far easier.

Ford next took to the flat bench dumbbell press. Since the training session focused on using the correct form, Ford instructed Bisping to alternate between his arms with each rep.

“Left side can go all day. Right side can’t…” Bisping said during the last rep.

The duo super-setted the alternating dumbbell bench press with push-ups done to failure.

This movement served as the finisher to the chest workout as Ford and Bisping performed a few sets and wrapped up the training session.

Bisping competed as a professional MMA fighter for the majority of his adulthood. In the video, he admitted that his days of training heavy for strength and muscle gain are behind him. Instead, training for longevity and overall fitness is his primary goal now. The World’s Scariest Man’s cerebral approach helped Bisping learn more about weight training.

Even though Ford has been practicing for a couple of years, he is yet to make his boxing debut. Although there have been speculations of him fighting the former World’s Strongest Man, Hafthor Bjornsson, neither athlete has confirmed the rumors. Judging by his boxing videos, it’d be safe to say that, although delayed, Ford’s boxing debut will be a treat to watch when it happens.